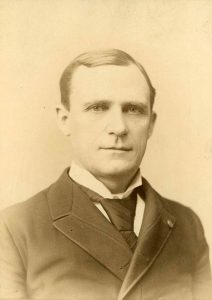 Lyman Underwood Humphrey was the 11th governor of the State of Kansas.

Humphrey was born in New Baltimore, Ohio, on July 25, 1844. At the age of 17, he left high school at Massillon, Ohio, to enlist in Company I, Seventy-sixth Ohio infantry during the Civil War. The company was mustered into the United States service on October 7, 1861. Later, he was a member of Companies D and E of the same regiment but was mustered out on July 15, 1865, as first lieutenant of Company I. His regiment was first attached to the First Brigade, First Division, Fifteenth Army Corps, commanded first by General  William T. Sherman and later by General John A. Logan. He was with his command in the engagements at Fort Donelson, Chickasaw Bluffs, Jackson, Vicksburg, and Chattanooga in the fall of 1863, and numerous battles and skirmishes of the Atlanta Campaign of 1864. After the fall of Atlanta, he was with Sherman in the famous “March to the Sea” and up through the Carolinas, taking part in the battle of Bentonville and being present at the surrender of the Confederate Army under General J. F. Johnston. 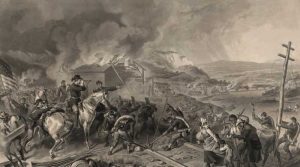 Shermans March To The Sea

After the war, he attended Mount Union College at Alliance, Ohio, for a short time and then entered the law department of the University of Michigan, where he graduated in 1867. He was admitted to the Ohio bar the succeeding year but soon afterward moved to Shelby County, Missouri, where he engaged in teaching and newspaper work.

In 1871, with his mother and brother, John E. Humphrey, he came to Kansas, locating at Independence, which he then called home for the rest of his days. He was one of the founders of the Independence Tribune and took an active part in the newspaper during the early years of its existence.

On Christmas day, in 1872, Humphrey was united in marriage with Amanda Leonard of Beardstown, Illinois, and in 1873 he engaged in the practice of law. Always a Republican, he soon became an influential factor in the councils of the Republican Party in Kansas, and in 1876 he was elected to represent his district in the State Legislature. While there, he served on the judiciary committee, one of the most important of the house. In 1877, he was elected Lieutenant-Governor for the unexpired term of Melville J. Salter, who had resigned, and the following year was elected to the office for a full term of two years. In 1884, he was elected to the State Senate. In the ensuing session of the legislature, he introduced the resolution to strike the word “white” from the constitutional provision relating to the state militia. Humphrey was nominated for governor by the Republican State Convention at Topeka on July 26, 1888, and at the election the following November, he was victorious. At the expiration of his first term, he was re-elected, holding office for four years altogether.

Upon retiring from the governor’s office, he resumed the practice of law. In 1892, he was the Republican nominee for Congress in his district but was defeated by Thomas J. Hudson, the Populist candidate. Humphrey died on September 12, 1915, in Independence, Kansas.