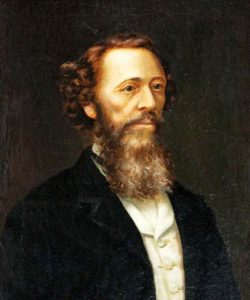 Mark W. Delahay was a Kansas jurist and politician.

Born in 1828, Delahay was a native of Talbot County, Maryland. Although his father was a slaveholder, his maternal ancestors were members of the Society of Friends, and he was averse to buying and selling slaves. He had scarcely attained legal age when he decided to seek his fortune in the West.

He first located in Illinois, where he was engaged in various enterprises; wrote for different journals; studied law, and was admitted to the bar. In 1853, he went to Mobile, Alabama, to practice law. However, in the winter of 1854, he became interested in Kansas and in March 1855, moved to Leavenworth. Although a Democrat and a supporter of the policy of “squatter sovereignty,” his sympathies soon became enlisted with the Free-State cause. On July 7, 1855, he began the publication of the Leavenworth Register. He served as one of the secretaries of the Topeka Convention on September 19, 1855, and as a member of the Topeka Constitutional Convention the following month. In December, while he was attending the Free-State Convention at Lawrence, his office was destroyed by a pro-slavery mob. He was elected to Congress under the Topeka Constitution but was never admitted to a seat.

In May 1857 he started the Register, the first paper in Wyandotte (now Kansas City), Kansas. He was a member of the Osawatomie Convention of May 18, 1859, which founded the Republican Party, and was chief clerk of the House of Representatives in 1860. He was appointed Surveyor-General of Kansas in 1861, a position he held until October 7, 1863, when President Abraham Lincoln appointed him United States District Judge of Kansas, a position he held until 1873.