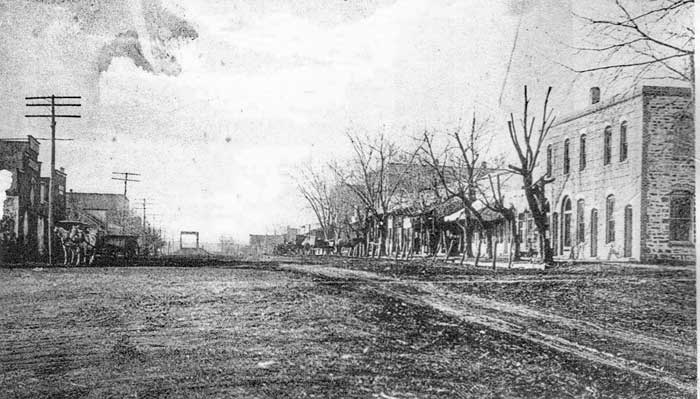 Melvern, Kansas, along the Marias des Cygnes River in Osage County, got its start when settlers arrived in the area in the 1860s. First built about a half mile northeast of the town’s current location, they named the town Junction Hills. The first school was a log cabin close to the river, but a sturdier building was constructed from heavy timbers and stone from nearby quarries in 1870, which also served as a town meeting place, and church services for several denominations on Sundays.

On a hill overlooking the river, it was determined that it wasn’t a good location for expansion due to the threat of flooding, so the town founders platted a new location in 1870. Within the first year, Melvern boasted three dry goods stores, a blacksmith, a drugstore, and a steam-powered sawmill. When it was incorporated in 1884, the town was renamed after one of the founder’s parents’ birthplace, Malvern Hills of Scotland.  But when the town’s charter came back the name was misspelled and changed to Melvern. 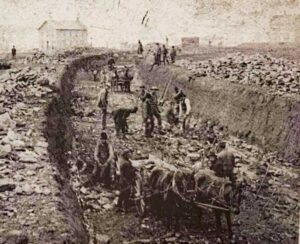 Hand digging the railroad cut at Melvern Kansas, 1882. The original school can be seen in the background.

Growth in Melvern was slow at first, but in 1884 the Kansas City and Emporia Railroad built lines through town, which shipped hard stone from a rich vein nearby, cattle, grain, and even clams from the river. Within just a couple of years, the population boomed to about 500. In 1890, brothers Charles E. and William H. Warner established one of two woven wire manufacturing businesses, steadying the town’s economy into the 20th century.  By the late 1800s, Melvern was home to four doctors, four lawyers, three general stores, four restaurants, three hotels, three drug stores, three livery stables, a couple of hardware stores, a bank, an undertaker, a broom factory, and a newspaper. The town was a trading and shipping point for the surrounding rural areas, with bridges being critical in providing farmers access to local markets.

In 1909, the Atchison, Topeka and Santa Fe (ATSF) railroad built an impressive steel truss bridge that spanned the existing double track used today through Melvern. The bridge was built as an overpass in order to avoid a dangerous crossing through Melvern. Not in typical form, the design of the bridge was actually the railroad’s standard truss design used for train traffic and featured a comparatively narrow deck width of 15 feet and a tall vertical clearance of 26 feet. Construction started in May 1909 and was completed by the end of the summer. 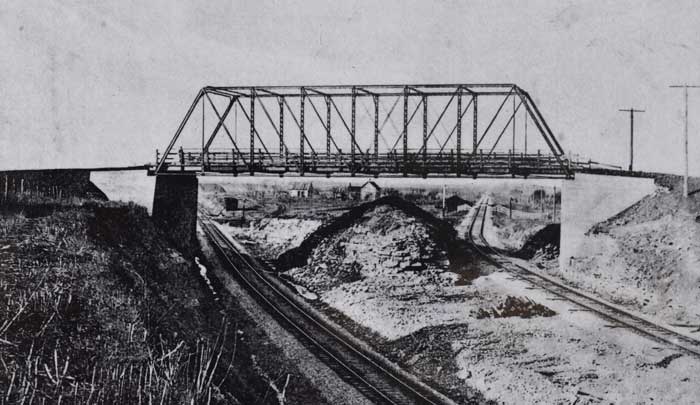 In the early 1920s, Melvern added a chees factory, along with a candy and Jolly Time Popcorn factory. 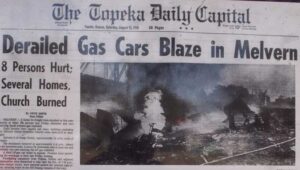 On August 14, 1970, a Santa Fe freight train derailed late in the afternoon, spilling and igniting its cargo of liquid propane gas. In the ensuing explosion close to the downtown area, eight people were injured and many buildings were destroyed or damaged. Fire crews from as far away as Topeka joined the battle to contain the blaze.

In 1974 the U.S. Army Corps of Engineers built a mile long earthen damn four miles west of Melvern to ease the river basin flooding, especially after the Great Flood of 1951. The resulting Melvern Lake continues to attract water enthusiasts to the eastern edge of the Flinthills region.  In addition to the corp-run campgrounds and shoreline, Eisenhower State Park, formerly known as Melvern State Park, sits on the north shore of the 6,900-acre lake and includes over 1,300 acres of prairie, over 400 acres of woodland and various recreation opportunities. The state park was renamed in 1990 to honor former U.S. President, and Kansas native, Dwight D. Eisenhower.  A 10,000-acre Wildlife Area sits adjacent to the park. 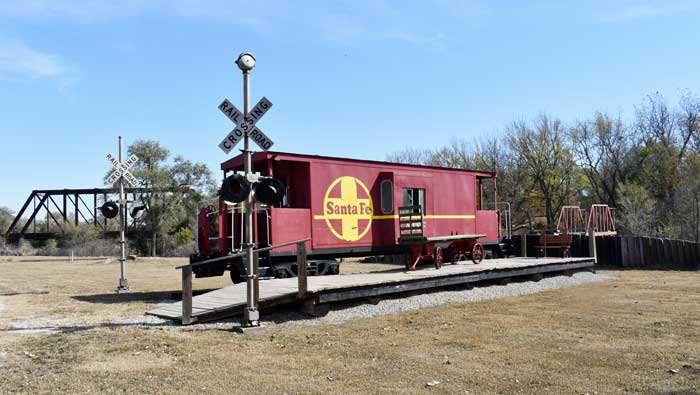 Railroad Park in Melvern Kansas. You can see the Truss Bridge in the background.

In more recent years the city established Railroad Park to commemorate the historic truss bridge and the railroad’s extensive history in the town.

As of the 2020 census, Melvern’s population stands at 356. Melvern is located in Osage County. 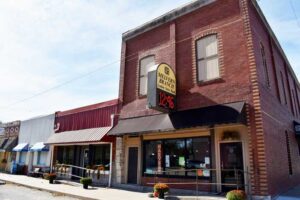