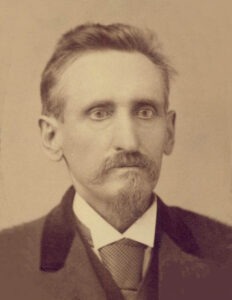 Milton W. Reynolds was a writer, politician, and newspaper publisher in Kansas.

Reynolds was born in Elmira, New York on May 23, 1823, to Alexander and Rebecca Reynolds. In 1827, he moved with his parents to Coldwater, Michigan, where he attended a public school and worked on a farm until he was 16. He then taught school, attended Albion Seminary, entered the University of Michigan in 1853, and graduated with the highest honors in 1856. He was editor of the Coldwater Sentinel in 1856-57 when he moved to Nebraska City, Nebraska, and was editor of the Nebraska City News until 1861. In 1858, he married Sarah Galloway of Livingston, Michigan, and the same year was elected to the Nebraska Legislature on the Democratic ticket. He was re-elected in 1861 on the Union War ticket, and after a protracted struggle, was defeated for Speaker of the House by a fusion of the Democrats and straight Republicans. He was editor of the Detroit Free Press at Detroit, Michigan in 1862 before moving to Kansas in 1865.

In 1876 he was elected to the legislature and was also made a regent of the University of Kansas, in which he was very much interested. The next year he resumed the publication of the Parsons Sun and in 1883, his retirement from the Leavenworth Press ended his activity as a publisher. However, he still corresponded for a number of papers, particularly the Kansas City Journal and the Kansas City Times, under the name of “Kicking Bird,” a nom de plume he appropriated from the Indian chief of that name. Reynolds was one of the promoters of the Missouri, Kansas & Texas Railroad, and it was through his efforts that most of the Osage Indians ceded lands were settled.