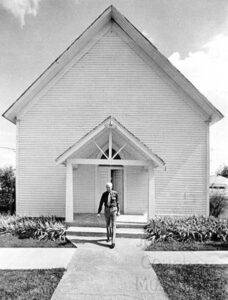 Sometimes referred to as Morris in historic writings, the town of Morse, Kansas was located in Johnson County, about six miles southeast of Olathe.

George McCaughey was the first to settle here in 1866. When McCaughey arrived some of the Black Bob band of Shawnee Indians still lived along the creeks. At that time, the area was a vast prairie containing some of the most fertile farmland in this part of Johnson County. Reverend M. B. Griffin preached the first sermon in McCaughey’s grove.

Situated along the Santa Fe and Oregon Trails, the Kansas City, Clinton, and Springfield Railroad generally followed these trails when the tracks were built in 1872. A post office was established on July 15, 1878, and the town was named after one of the railroad superintendents.

The State Bank of Morse was organized on June 22, 1910, at which time the town was called home to about 100 people. At its peak, Morse contained a bank, a general store, blacksmith shop, grain elevator, feed and hardware store, creamery, lumberyard, and a grocery. By 1915, the population had dropped to 61, but the Smith Brothers still operated a general store and the Morse Grain Company operated an elevator that handled a large amount of grain, mostly wheat and corn.

Only a few old buildings remain today, the most prominent of which is the Morse Church at 15431 Quivira Road, in Overland Park. Established in 1884, it is still in use today.

Today, this area near 151st and Quivira Streets is part of Overland Park, Kansas.