The town was established in 1869 by Reverend A. J. Bartels, a minister of the Swedenborgian Church, who with J. R. Elder and C. P. Loricke were representing a stock company with a capital of $10,000 raised for the purpose of founding a town in Kansas.

After the townsite is surveyed, about one-third of the lots were reserved for a college and make Olivet the headquarters for the Swedenborgians of the entire West. The remainder was sold at public sale, on May 1, 1869. Only a few of the buyers settled at once. Among the first settlers were Reverend A. J. Bartels, J. R. Elder, C. P. Loricke, Frank Hindman, James Dickson, Dr. T. B. Haslam, William Haslam, George Phinney, J. Q. Sook, L. W. Powell, P. Hesler, and H. J. Davis.

The first year saw considerable growth. Olivet was incorporated as a city of the third class. William Haslam opened a store for general merchandise and drugs, H. J. Davis opened a hotel, Bartels & Munger started a sawmill, and wagon and blacksmith shops were opened.

In the beginning, the nearest post office was at Burlingame, 20 miles distant, and William Haslam would have the mail for the neighbors brought over to his store whenever an opportunity occurred.

A post office was opened on April 15, 1870, and William Haslam was appointed postmaster. That year Dr. W. C. Sweezey opened a store, T. B. Haslam opened a broker’s and exchange office, and some other business enterprises were started. City bonds in the amount of $10,000 were voted to aid in the erection of a flouring mill. Of this $3,000 were issued, after which it was abandoned as a public enterprise, but was completed on a smaller scale by Bartels & Munger.

It was expected that a railroad would soon be built up the Marais des Cygnes Valley from Ottawa to Emporia, but when the project failed the new town began to decline at once, and many of the settlers left the country. The only business houses left are Sweezy’s store, where it kept a small stock of drugs, and a cooper shop operated a part of the year.

In 1873, a fire swept over the town, destroying two unoccupied residences, a few stables, and a great deal of grain, and hay, and then more settlers left the neighborhood.

The population of the village was once about 300, but by the early 1880s, the population had dwindled and the townsite was covered with farms.

However, just a few years later, the post office was moved back from Penfield to Olivet on October 6, 1888. 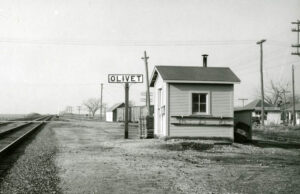 By 1910, the town was a station on the Atchison, Topeka & Santa Fe Railroad and was a shipping point for the prosperous farming community. It had banking facilities, telegraph and express offices, a money order office with one rural route, and a population of 200.

In the next decades, Olivet remained a small town, but its population began to drop after 1940.

North of Olivet, the Melvern Reservoir dam was completed in 1970, and the lake was completely filled in 1975.

Today, the area is called home to about 70 people. The community is served by Marais des Cygnes Valley USD 456 public school district in Melvern.

Olivet is located 12 miles south of Lyndon, the county seat.