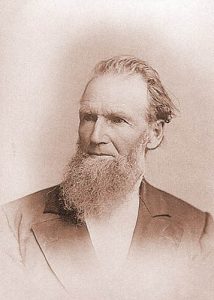 Pardee Butler was a pioneer minister in Kansas, who helped the territory become a Free-State.

Butler was born in Onondaga County, New York on March 9, 1816, a son of Phineas Butler, an old Henry Clay Whig. In 1819 the family moved to Ohio, where Pardee united with the Christian Church, and in time was ordained to the ministry. In 1855, he moved to Kansas and entered a claim about 12 miles from Atchison. On August 16, 1855, while waiting at Atchison for a boat to go east on business, Butler met Robert S. Kelley, the assistant editor of the Squatter Sovereign, and in the course of the conversation remarked that he would have become a regular subscriber to the paper sometime before but for the fact that he disliked its policy. Kelley replied:

“I look upon all free soilers as rogues, and they ought to be treated as such.” To this Butler replied that he was a free soiler and expected to vote for Kansas to be a Free-State, whereupon Kelley angrily retorted: “I do not expect you will be allowed to vote.”

Nothing further was said at the time, but early the next morning Kelley and a few other pro-slavery men called at the hotel and demanded that Butler subscribe to some resolutions which had been adopted at a recent meeting, one of which was as follows:

“That we recommend the good work of purging our town of all resident abolitionists, and after cleansing our town of such nuisances shall do the same for the settlers on Walnut and Independence creeks, whose propensities for cattle stealing are well known.”

Butler was a man of positive views and undaunted courage and naturally refused to sign a resolution so contrary to his opinions. The mob then seized him, blackened his face, placed him upon a raft, and set him adrift upon the Missouri River. Several flags were then raised on the raft bearing the inscriptions: “Eastern Emigrant Aid Express. The Reverend Butler, Agent for the Underground Railroad. The way they are served in Kansas; For Boston. Cargo insured—the unavoidable danger of the Missourians and the Missouri River excepted; Let future Emissaries from the North beware.” 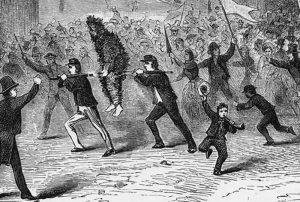 He was again maltreated by a mob led by his old enemy, Kelley, on March 30, 1856, when he was given a mock trial and sentenced to hang. But this decree was changed and he was given a coat of tar and cotton wool. At the same time, he was informed that if he ever appeared in Atchison again he would be put to death.

Even this did not dampen Butler’s ardor for the Free-State cause. He never shirked what he conceived to be his duty, and he contributed in no small degree to making Kansas a Free-State.

Butler was thus banished from the territory where he had chosen to make his home. But if his assailants thought for a moment that he would remain away permanently they were wrong. He soon returned, perfected the title to his claim, and continued to live in Kansas until his death, which occurred at Farmington, Kansas on October 20, 1888.