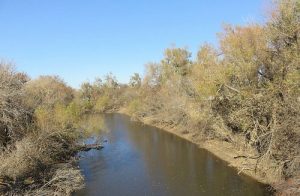 The Pawnee River, also called the Pawnee fork of the Arkansas River, rises in the northwest corner of Gray County in southwest Kansas.

For the first 15-20 miles its course is almost due north. Near the now-extinct town of Eminence in Finney County, it turns abruptly eastward; crosses the line between Finney and Hodgeman Counties about eight miles south of the northern boundary of those counties; then flows northeast into Ness County; turns southeast across the corner of Hodgeman County, and then by a somewhat sinuous course eastward through Pawnee County, before it empties its waters into the Arkansas River at Larned. 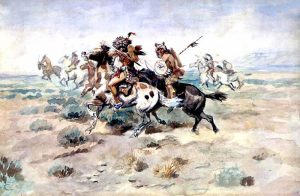 Its principal tributary is Buckner Creek. A number of interesting events occurred in the valley of this stream in the early days. In 1854, soon after Kansas was organized as a territory, about 1,500 Cheyenne, Arapaho, and Osage Indians gathered on the Pawnee River to make war on the white settlers. They started eastward toward the settlements, but about 100 miles west of Fort Riley, they were met by a hunting party of about 100 Sac and Fox Indians and were driven back with heavy losses.