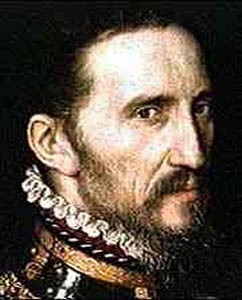 Pedro De Castaneda was a chronicler of the Coronado Expedition to Quivira in 1540-42 that came through Kansas.

Castaneda was a native of the Biscayan town of Najera in Spain. He came to the Americas before the middle of the 16th century and became prominently identified with Mexico’s government and affairs. He lived in the Mexican town of Culiacan from which the expedition set out, at which time he was listed on the muster roll as departing with two horses, one coat of mail, and “native weapons.”

His Coronado Expedition account was first written in Mexico soon after the event, but the original manuscript has disappeared. After returning to Spain, Castaneda made a copy, which was finished on October 26, 1596.

His narrative was not published but remained in the archives until translated first to French and then to English. The Spanish manuscript, now in the Lenox Library in New York, was translated into English by George P. Winship, assistant in American History at Harvard University. His translation was published in the 14th annual report of the United States Bureau of Ethnology.

Castaneda’s account ranks with the log of Christopher Columbus and De Soto’s expedition as one of the most important documents on the early European exploration of North America. Unfortunately, little is known about the author himself beyond what he says in this document.

The Kingdom of Quivira

The Mythical Seven Cities of Cíbola