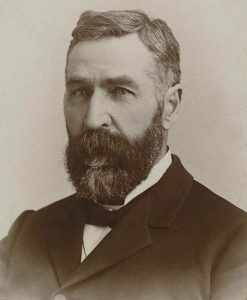 Peter McVicar was a clergyman, soldier, and educator in Kansas.

McVicar was born at St. George, New Brunswick, Canada, on June 15, 1829. His parents were natives of Argyleshire, Scotland. At the age of 14 he went to Wisconsin, and in 1852 entered Beloit College. Subsequently, he studied for the ministry at the Union Theological and Andover seminaries, graduating at the latter in 1860. In October of that year, he came to Kansas and within a few months became pastor of the First Congregational Church of Topeka.

At the outbreak of the Civil War, he enlisted in the army and served under General Curtis. From 1866 to 1870 he was superintendent of public instruction of Kansas and while holding this position was instrumental in saving to the state the school lands in the Osage Indian reservation. At the close of his second term as superintendent, he was offered and accepted the presidency of Washburn College, which at that time had neither site, endowment nor buildings and the building up of this well known educational institution may be regarded as his life work and stands as a monument to his memory.