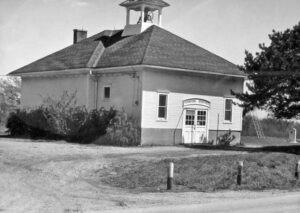 The first organized German Baptist Church in Douglas County met in the house of Stephen Studebaker in Pleasant Grove in 1858.

Several years later, during Quantrill’s Raid and the Lawrence Massacre in August 1863, Quantrill’s and his men came close to Pleasant Grove after pillaging Lawrence. However, because many of the raiders were drunk and loud, the townsfolk were alerted to the raiders’ presence. Nevertheless, Quantrill and his men razed a number of houses and barns in the area, looking for any anti-slavery settlers.

Pleasant Grove School District No. 38  was established in 1866 and would have three schools serve the district in the next 93 years. The first two buildings were razed when the number of students required larger buildings. The third and last school was located on the east side of old Highway 59.

In 1877, the first German Baptist meeting house in the state of Kansas was built in Pleasant Grove.

By 1910, Pleasant Grove had a population of 45 and received its mail by rural delivery from nearby Baldwin City. 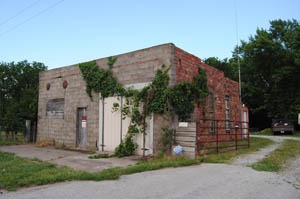 Old building in what was once Pleasant Grove, Kansas by Kathy Alexander.

Though the town did not grow, Pleasant Valley School District No. 38 was continued to maintain a school until the district was disorganized on June 4, 1959, and consolidated with Wakarusa Valley District NO. 98.

At some point, the town of Pleasant Grove took over the Flory Family Cemetery and renamed it to Pleasant Hill Cemetery.