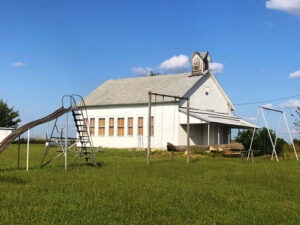 Plymouth is an unincorporated community in Lyon County, Kansas. It is technically also an extinct town.

One of the oldest settlements in the county, the first to arrive was C. Humphrey in 1857. He was followed by John Smith, C. Stout, John Carter, E. Parker, and others. John Carter built the first house in Plymouth. Plymouth was platted and laid out in 1858 and probably gained its name from Plymouth, Massachusetts.

The post office was established on February 10, 1858, with D. McMillan appointed the first Postmaster. In 1859, C. Humphrey opened the first store.

When the Civil War started in 1861, the men of Plymouth formed a militia.

The first school opened in 1862, by Mary Hammis, and it was kept in a private dwelling until 1864 when a schoolhouse was erected. During the same year, religious services were held by Reverend J. Steel, at the house of Mrs. Campbell. A sawmill was also built that year by Townsend & Campbell. Later, a grist mill was also built. 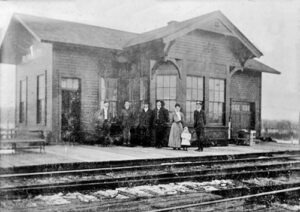 Before the railroad arrived, stagecoaches stop for meals at John Carter’s home and quench their thirst from the well house, next to Carter’s spacious house.

Plymouth was located in the midst of rich farming land and transacted more business annually, for its size, than any point in the county.

The Atchison, Topeka & Santa Fe Railroad arrived in Lyon County in 1870 and soon Plymouth became a station and shipping point on the line.

In 1882, a new schoolhouse was built. It is unknown when the school closed, but the white clapboard school, with its old belfry, broken sidewalk, and playground equipment still stands today.

By 1910, Plymouth had telegraph and express offices and a money order post office with one rural route. At this time it continued to be a shipping and receiving point for a large farming area. Its population was 100.

However, in the next years, the community declined and the post office closed on February 31, 1930.

Today, the community, along with its historic one-room school, is comprised of a number of scattered homes. Area students are serviced by the Emporia USD 253 public school district. 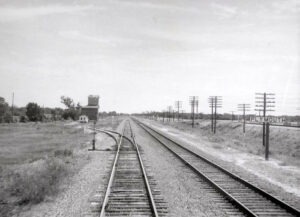