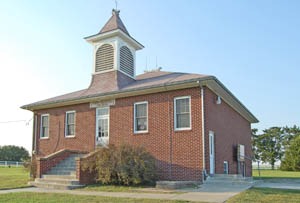 In 1886, the Missouri-Pacific Railroad built a tent camp for workmen and 200 mules at the site. In 1887, the tracks were laid, and railroad service commenced for freight, passengers, livestock, and farm produce. Later, side tracks were installed, and a depot and stockyard were built.

In 1902 a general store was established by Robert and Will Skonberg. Two years later, the Chelberg Brothers built a lumber yard. Though Rapp Village was never incorporated and never had a post office, it had the amenities of a small community. In addition to these new businesses, the town also had about a dozen homes and a blacksmith.

Unfortunately, the general store burned down in 1926.

In 1929, the Leighty Brothers of Osage City, Kansas, built a new red-brick school building. This modern one-room school contained a full basement, a hand pump and sink for water and a coal furnace, electricity pre-dating Rural Electrification, windows, boys’ and girls’ cloakrooms, a library, and 42 desks. The schoolhouse was integral to the Rapp village during its early years.

On July 1, 1962, the school was discontinued when consolidation forced its closure. At that time, only five students were enrolled; the last teacher was Mae J. Carlson. Afterward, the building was deeded to the GrantTownship Board of Trustees for community use.

The ladies in the Rapp Extension Homemakers Unit cleaned and maintained the inside of the building until the 1990s. It was used as a vacation Bible School, a voting place for Grant Township, and a meeting place for community groups in the following years.

The Rapp School Preservation Association was formed in 1992, and the building was repaired with contributions from many former students and others, plus grants from the W.S. and E.C. Jones Trust. 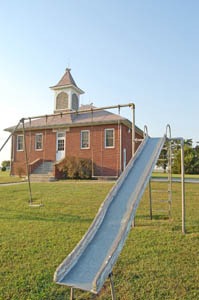 In 1995 the Rapp School Building was listed as a State Historic Site and then placed on the National Register of Historic Places.

In 1996, the Missouri Pacific Railroad removed its tracks.

The building still has its original furnishings, including the teacher’s desk, recitation desk, student desks, cloak hooks, lunch cupboards, wall maps, counting sticks, books, and a piano. The bell in the two-story bell tower still rings crystal clear. A visit to the school is like stepping back in time.

The beautiful brick schoolhouse and playground adjoin the Rapp Cemetery to the north, where many early family names may be found. These two sites, along with a few area homes near the old railroad crossing, are all that is left of the former Rapp village.

The historic school is five miles west of Osage City on Highway 56.

The old Rapp Schoolhouse in Osage County, Kansas, is one of the few, if not the only one-room eight-grade schoolhouses in the state that still has its original desks and textbooks.