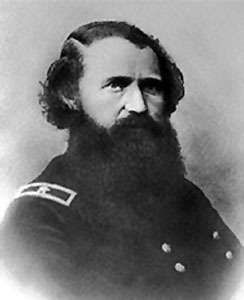 Robert B. Mitchell was a soldier and Free-State advocate in Kansas.

Mitchell was born in Richland County, Ohio on April 4, 1823. He was educated at Washington College in Pennsylvania, after which he studied law, was admitted to the bar, and practiced at Mansfield, Ohio from 1844 to 1846. He then entered the army as a first lieutenant in an Ohio regiment and served through the Mexican-American War, resuming his law practice in 1847.

In 1856 he moved to Kansas, where he became an active participant in political affairs as a Free-State advocate, and in 1857 was elected to the Kansas Territorial Legislature. From 1858 to 1861 he held the office of Territorial Treasurer. When the Civil War broke out he again entered the army, this time as a colonel of the Second Kansas, and was severely wounded at the Battle of Wilson’s Creek. Subsequently, he raised a regiment of cavalry and was commissioned Brigadier-General of Volunteers. At the Battle of Perryville, Kentucky on October 8, 1862, he commanded a division of the Third Army Corps, and at Chickamauga, he was in command of the cavalry corps of the Army of the Cumberland.

At the close of the war, he was appointed governor of New Mexico and held that office until 1867, when he moved to Washington, D. C., where his death occurred on January 26, 1882.