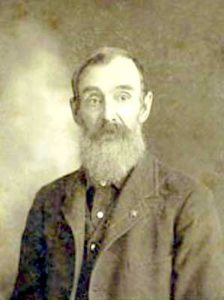 Robert Hall Pearson was one of the first settlers in Palmyra Township of Douglas County in what would later become Baldwin City, Kansas.

Pearson was born in Yorkshire, England to William and Fannie Hall Pearson on April 1, 1828. In 1832, the family immigrated to the United States and settled in Allegheny City, Pennsylvania.

When a young man he attended school and worked with his father learning the cabinet-maker’s trade. When he grew up, he worked for five years in a cotton factory. He then learned the trade of a stagecoach body-builder, which he worked at for a time.

In 1851, he followed the lure of gold to California, but after working as a miner for several years, he returned to Pennsylvania in the spring of 1854. However, he wasn’t there long, as he was soon on a steamboat headed from Pittsburgh, Pennsylvania to St. Louis, Missouri. From St. Louis, he then made his way by boat to St. Joseph and then Weston, Missouri, where he waited with others for information on the ratification of the Kansas-Nebraska Bill then pending in Congress.

In May, he in the company of a man named Gauis Jenkins and other men, traveled to Kansas to locate claims in the new Kansas Territory. Jenkins would later be killed by James H. Lane over a land dispute. Pearson soon made a claim just north of present-day Baldwin City in May 1854. Already living in the area was a man named Kibbe, who Pearson stayed with for a couple of months. Kibbe became an ardent Free-State supporter and allegedly killed a pro-slavery advocated named Davis. He was arrested but released on bail and soon disappeared from the area. Pearson married in 1855, to Catharine Baysinger, a daughter of another early pioneer. The couple would eventually have nine children.

It was by no means easy for Pearson to hold his claim, as pro-slavery men made repeated efforts to drive him away; however, he had as much courage and more determination than they.

Pearson also took an active part in the ranks of the Free-State party. He was connected with Captain Shore’s and Captain Dexter’s companies and took part in the battles of Franklin and Black Jack, the defense of Lawrence, and others. Later, Pearson’s original claim was found to be within the limits of the Shawnee Indian Reservation so he took another claim close by in the spring of 1860.

Along the old Santa Fe Trail, he purchased more than 200 acres that included the Black Jack Battlefield from the Wyandot Indians. During the Civil War, Pearson was connected with the Missouri State Militia under Colonel Nugent, and took part in the pursuits of William Quantrill and General Sterling Price. Afterward, he settled back down on his homestead and in the 1880s built a home for his family that overlooked the Black Jack battlefield, where he had fought along with John Brown. 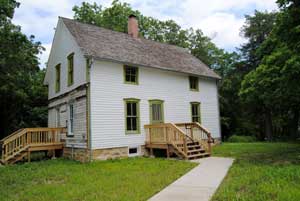 Unfortunately, his first wife died in December 1878 and several years later, he married Rosella Harris, of Palmyra Township in February 1884. A successful farmer and businessman, he died in 1906 at the age of 84.

The house and surrounding land continued to be occupied by his descendants until 2003. At that time, the old homestead was purchased by members of the Friends of the Black Jack Battlefield and the Lawrence Preservation Alliance to keep it from being developed into a residential area. Pearson’s old home, a perfect example of a Kansas farmhouse during that period, is listed on the Kansas Register of Historic Places. 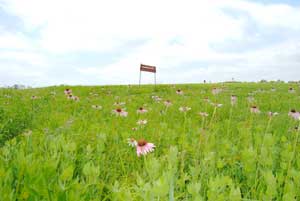