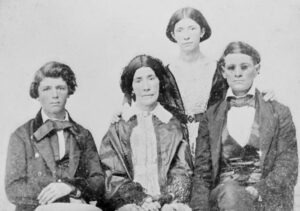 Samuel M. Irvin was an Indian missionary and teacher in Doniphan County, Kansas.

Born in Pennsylvania in 1812, Irwin grew up to become a minister and marry his wife Eliza.

In 1835, he was appointed a missionary to the Ioway Indians by the Presbyterian Foreign Board. A mission was established on the Platte Purchase in Northwestern Missouri.

In 1837 the U.S. Government removed the Ioway and Sac and Fox tribes from Missouri to reservations west of the Missouri River near present-day Highland, Kansas in Doniphan County. In November 1837 Samuel M. Irvin and his wife, Eliza established a mission two miles west of the mouth of Wolf River. At that time, the Indians survived primarily by hunting.

The first mission building was built in true frontier style, of round logs It was one story high, covered with clapboards with a clay chimney. The children were taught in English and the Ioway language. This was made partially possible by the arrival in 1843 of a printing press on which Irvin published a hymnal and several grammar books in the Ioway language. Studies included spelling, arithmetic, and geography, but emphasis was placed on the industrial and domestic arts and farming. The girls were taught home-making and housekeeping under the supervision of Mrs. Irvin. They were also taught how to make butter, canning, preserving, cooking, and laundry. Boys were taught farming, gardening, care of livestock. Much of the missionary work was carried on at their homes, instructing them in habits of industry, morality, cleanliness, and sobriety. 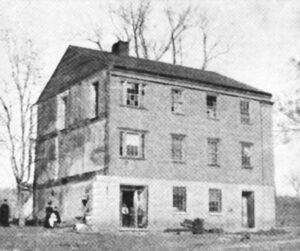 In 1845, the Presbyterian Board of Commissioners began the erection of a new three-story building with 32 rooms.

When the Kansas-Nebraska Act was passed in 1854, a new treaty was negotiated with the Indians which resulted in a reduction of Indian lands. The treaty took effect that same year, and white settlements began to pour in. As a result of the loss of land, the mission became too far removed from the two reservations to make attendance at the school convenient for Indian children. After the Irwins had spent 26 years civilizing and Christianizing the Indians, the mission closed in 1863.

Afterward, Irvin worked at the Highland University, two miles west of the Iowa and Sac Mission.

Eliza Irvin died in 1886 and Reverend Irvin died a year later. Both were buried in Highland cemetery 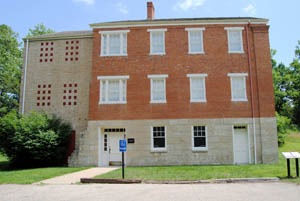 The old Iowa, Sac, and Fox Mission Museum still stands and is currently operated as a historic site museum, by the Kansas State Historical Society.