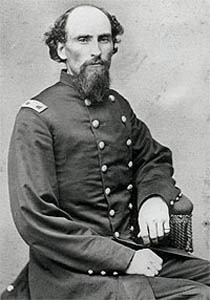 Samuel J. Crawford was a lawyer, soldier, and the third governor of the State of Kansas.

Crawford was born in Lawrence County, Indiana on April 15, 1835. While a student in the Bedford Academy he began to study law and in 1858 was admitted to the bar. The following year he moved to Kansas and began a practice at Garnett. On December 6, 1859, he was elected a member of the First State Legislature, which did not meet until March 26, 1861. At the end of six weeks’ service as a legislator, he resigned his seat in the house to enter the army and raised a company, of which he was commissioned as a captain. His company was assigned to the Second Kansas Infantry, with which regiment he served until in March 1862, when he was assigned to the command of Troop A, Second Kansas Cavalry. While in command of this troop he distinguished himself by leading a charge against and capturing a battery of four guns near Old Fort Wayne, Oklahoma.

At that time Major Van Antwerp, an old West Pointer, who was at that time Inspector-General on the staff of General  James G. Blunt, saw the charge, and as the captured guns were being brought within the Union lines, rode over to General  Blunt and asked: “Who is the officer that led that charge?” General  Blunt answered: “Captain Crawford of the Second Kansas Cavalry.” “Do you know, General,” said Van Antwerp, “that if that man had been with Napoleon at Lodi, and had done what he did here today, he would have been made a marshal on the field?”

Captain Crawford was not promoted on the field at the time of his gallant charge, but his promotion was not long in coming. He was given command of a battalion of the Second Kansas Cavalry, and on December 5, 1863, he was made colonel of the Second Kansas, or Eighty-Third U. S. Colored Infantry. On November 8, 1864, while serving as colonel of this regiment, he was elected governor of Kansas, and on December 2nd, he resigned his commission in the army to prepare for his gubernatorial duties. He was inaugurated at the opening of the legislative session the following January, and further military promotion came to him on March 13, 1865, when he received the rank of brevet brigadier-general “for gallant and meritorious services.”

On November 27, 1866, he married Miss Isabel M. Chase, of Topeka and they would have two children. The same year, he was re-elected to the office of governor, and served until the autumn of 1868, when he resigned to assume the command of the Nineteenth Kansas Regiment, which was then being organized for a campaign against the hostile Indians on the western frontier. The regiment, with Colonel Crawford at the lead, left Topeka on November 6th, and 20 days later joined General Philip Sheridan’s army.

Upon returning home from this expedition, Governor Crawford located at Emporia, where he was engaged in real estate business until 1876 when he moved to Topeka. In 1877 he was appointed an agent at Washington for the State of Kansas, and he continued to serve in this capacity for several years, during which time he successfully adjusted a number of claims against the United States and collected a large amount of money for the state. He also recovered 276,000 acres of school lands, and nearly 850,000 acres in western Kansas claimed by railroad companies. At the conclusion of his services as a state agent, Crawford opened a law office in Washington, D.C., practicing there during the fall and winter seasons and spending his summer on his farm near Baxter Springs.

He retired to Topeka and was the author of Kansas in the ’60s, a work that attracted much attention as a picture of conditions in early Kansas history. He died on October 21, 1913.