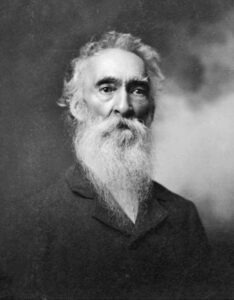 Samuel A. Kingman was a Chief justice of the Kansas Supreme Court from 1867 to 1876.

Kingman was born in Worthington, Massachusetts on June 26, 1818, to  Isaiah and Lucy Kingman. Samuel was educated in public schools and at Mountain Academy in Worthington and began teaching when he was 17 years old. Two years later he went to Kentucky, where he taught school and studied law. After being admitted to the bar he began to practice at Carrollton, Kentucky, before moving on to Smithland, Kentucky. Here, he served as County Clerk and District Attorney for three years from 1849 to 1851; represented the county in the State Legislature; and took part in framing a new constitution for the state. On October 29, 1844, he married Matilda Willets of Terre Haute, Indiana, and the couple would eventually have two children. In 1857 he moved his family to Knoxville, Iowa, and about a year later became a resident of Kansas.

For six months he was located in Leavenworth, then took up a claim in Brown County, near the site of Horton. Subsequently, he moved to Hiawatha and opened a law office. In 1859 he was a member of the Wyandotte Constitutional Convention and the same year was one of the three commissioners appointed by the legislature to adjust the territorial claims. When Kansas became a state, Kingman was nominated for Associate Justice on the Union Republican ticket but was defeated. Two years later, he was elected Chief Justice and re-elected in 1872.

He resigned from the bench in 1876 because of ill health. Later, he was appointed State Librarian but was compelled to give up this position for the same reason. He was the first president of the Kansas State Historical Society and a director of it until his death. He was also President of the State Judicial Association and the Kansas State Bar Association. Judge Kingman was a Whig until the formation of the Republican party when he became one of its staunch supporters. Judge Kingman died at Topeka, on September 9, 1904. Kingman County was named in his honor.