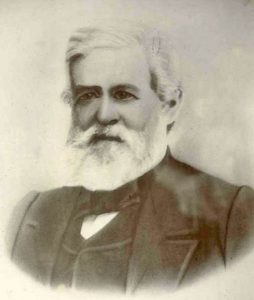 Medary was born in Montgomery County, Pennsylvania, on February 25, 1801. He was educated at the Norristown Academy and at the age of 16, was a contributor to the Norristown Herald. The encouragement he received from the editor of that paper influenced him to select journalism as a profession. He learned the printer’s trade and, in 1825, went to Batavia, Ohio. Three years later, he started the Ohio Sun in the interest of General Andrew Jackson’s candidacy for the presidency.

In 1834 he was elected as a Democrat to the lower house of the Ohio Legislature and at the expiration of his term, was chosen to represent his district in the state senate. He then purchased the newspaper known as the Western Hemisphere at Columbus and changed the name to the Ohio Statesman, which he continued to edit until 1857. His newspaper became a power in Ohio politics and even wielded a national influence with the Democratic Party. When the Oregon boundary became a subject of dispute, Medary is credited with being the author of the slogan: “Fifty-four Forty or Fight.”

In 1844 he was a delegate to the Democratic National Convention in Baltimore, Maryland, where he produced a letter from General Jackson requesting him, in case of discord, to present the name of James K. Polk for the presidency. This was done, and Polk was nominated. In 1856 Medary was temporary chairman of the National Convention that nominated James Buchanan and did all in his power to secure the nomination of Stephen A. Douglas. In March 1857, he was appointed governor of the Territory of Minnesota. When it was admitted as a state in May 1858, he was made postmaster at Columbus, Ohio. He held that position until he was appointed territorial governor of Kansas the following November.

He resigned from the governorship in December 1860, returned to Columbus, and established the Crisis, which he continued to publish until his death on November 7, 1864. Governor Medary was endearingly called the “Old wheel-horse of Democracy.” In 1869, the Ohio party erected a monument at Columbus “In commemoration of his public services, private virtues, distinguished ability, and devotion to principle.”