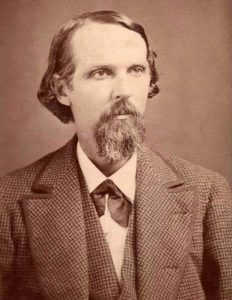 Sidney Clarke was one of the early members of Congress from Kansas.

Clarke was born in Southbridge, Massachusetts on October 16, 1831. He was not given the advantages of a liberal education, and at the age of 18, he left his father’s farm to work in a general store in Worcester. While working at the store, he studied at night and within a short time began to write for the press. He soon gained recognition as a versatile and forcible writer and joined a young men’s literary society, where his natural ability as a debater quickly developed.

In 1854, he returned to his native town and started a weekly newspaper known as the Southbridge Press, which flourished for five years. He became an active member of the Free Soil Party, casting his first vote for Hale and Julian in 1852. In the campaign of 1856, he actively supported General John C. Fremont. In the spring of 1858, Clarke’s health became impaired and upon the advice of his physician, he went west, settling in Lawrence, Kansas the following spring. His interest in politics began to assert itself immediately and he became an ardent supporter of the Radical wing of the Free-State Party. In 1860 he married Henrietta Ross at Lawrence, and the couple would have four children.

In 1862 he was elected to the State Legislature and the following year, President Abraham Lincoln appointed him Adjutant-General of Volunteers, and he was assigned to duty as acting Assistant Provost Marshal General for the District of Kansas, Nebraska, Colorado, and Dakota, with headquarters at Fort Leavenworth.

The same year he was made chairman of the Republican State Committee, a position previously held by the ablest of the old Free-State leaders. From this time on Clarke was a conspicuous political figure in Kansas. In 1864 he was elected to Congress and re-elected for two succeeding terms. In Congress, Clarke was Chairman of the House Committee on Indian Affairs and a member of the Pacific Railroad Commission. The defeat of the Osage Indian treaty and the passage of the Clark Bill saved Kansas much of her public school lands.

During his three terms in Congress, Clarke was the only representative from Kansas and he referred proudly to himself as “the sole representative of my imperial state.” He was in Congress at the time of the assassination of President Lincoln, of whom he was a close friend, and was placed on the committee that accompanied the body to its last resting place. He was defeated for election to Congress in 1870, but was elected to the State Legislature in 1878 and made Speaker of the House.

In 1873 his wife died and several years later, in 1881, he re-married Dora Goulding of Topeka. They would have one daughter. In 1898 he moved to Oklahoma and few men had a more powerful hand in shaping the destinies of the new state. Clarke died in Oklahoma City, Oklahoma on  June 19, 1909.