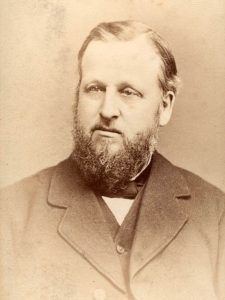 Solon O. Thacher was an attorney, Free-State advocate, and politician in Kansas.

Thacher was born on August 31, 1830, in Steuben County, New York. He graduated from Union College of Schenectady, New York, and from the Albany Law School. In September 1856, he married Sarah M. Gilmore of York, New York.

They came to Kansas in 1858, settled at Lawrence, and he was one of the proprietors of the Lawrence Journal. He was a member of the Wyandotte Constitutional Convention, was appointed Judge of the Fourth Judicial District in 1861, and was a candidate for governor in opposition to the James H. Lane faction of the Republican Party in 1864. From that time until 1880, he was engaged in the practice of law.

He amassed a fortune; was several times a Regent of the University of Kansas; held the chair of Equity Jurisprudence in its law school, and in 1880, was elected to the State Senate. Two years later, he was a candidate for governor against John P. St. John. At the close of his first term in the Senate, he was appointed a member of a commission to visit the South American republics in the interests of reciprocity. He made a perilous voyage of over 34,000 miles and, being shipwrecked off the coast, was taken to England before returning to America. He met nearly every ruler in the southern continent, learned a great deal about the conditions existing there, and his report to Congress was so exhaustive that he was called before a special committee to explain his views on reciprocity.

On his return to Kansas, he was again elected to the State Senate, of which he was a member for the remainder of his life. He was president of the State Historical Society at the time of his death in August 1895.

Territorial Kansas and the Struggle for Statehood