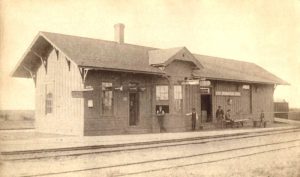 Yet another town on the Atchison, Topeka & Santa Fe Railroad, land was deeded by the railroad to the Arkansas Valley Town Company in March 1873 and it was soon surveyed and platted. The town was first called Speareville, for Alden H. Speare, a railroad director and president of the town company. However, the town name was consistently misspelled “Spearville,” and finally the “e” was eliminated altogether. In the early days, the community was also called Dry Ridge and had a big water tank beside the railroad.

Its first settler was railroad section foreman, Jonas Stafford and his family, who settled in January 1875. Mrs. Stafford and their daughters soon opened an eating house which soon gained a reputation for its excellent food. Their home restaurant was the only sign of life between Offerle and Dodge City for some time, but it was also a “must stop” for the railroad men who made it a point to stop at the Staffords for their meals. 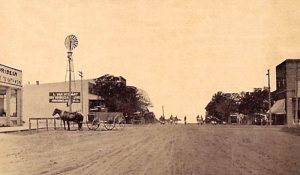 Two more settlers finally came to the town in June 1877 — George Hall and M. Wear. That same month, the area population was sufficient enough for a post office which was opened on June 11. The following year, a group from Cincinnati, Ohio also came to town the Spearville Enterprise newspaper was established in May 1878. It later was renamed the Spearville News. The Leidigh & Co. merchandise store was established the same year.

By the early 1880s, the town had developed into a lively business community with two hotels, several supply and grocery stores, a Methodist Episcopal Church, and a bank. The area was surrounded by sheep farms with some 60,000 head roaming the prairie. Situated near the German community of Windthorst, after a railroad venture to that settlement failed, Spearville profited from the Germans who shopped and worked in Spearville. 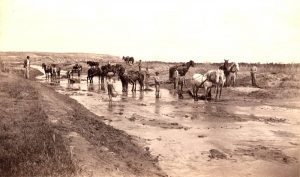 During this time, a New York millionaire named Asa Soule financed the Eureka Canal which was to be an irrigation ditch that would provide water from the Arkansas River to Ford, Gray, and Edwards Counties.

Construction began in 1883 and would take at least two years to complete. Soule paid his laborers $1.50 a day, or $2.50 if they supplied their own team. The finished product would zigzag 96 miles along the north side of the Arkansas River from near Ingalls in Gray County to Coon Creek in Edwards County. Building for the canal began in 1884, but by 1887, as the construction came near Spearville the project was beginning to fail due to drought and other projects upstream, cut construction continued. 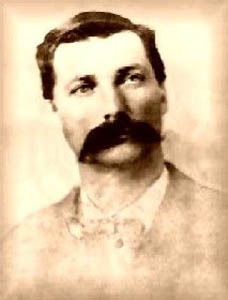 By 1890, the irrigation Canal was no longer a viable way to use the Arkansas River water. Afterward, it became known as “Soule’s Folly.” Some of its remains still grace the landscape in Ford and Gray Counties. For years, irrigators attempted in vain to salvage the Eureka canal by using pumps, but too much water was lost from evaporation and leakage. After changing ownership numerous times “Soule’s Elephant” was totally abandoned in 1921. However, the project paved the way for more successful efforts at irrigation which is now common and vital to agriculture in the region.

On November 1, 1892, outlaw Bill Doolin and his Wild Bunch gang proved that the Wild West had not yet been tamed in Ford County. On that day, Doolin and two members of his gang robbed the Ford County Bank in Spearville of $1,697 in cash and over $1,500 in treasury notes. After the robbery, the gang fled with gang member Oliver “Ol” Yantis to Oklahoma. Yantis was soon found and was killed in a shootout on November 29, 1892, in Orlando, Oklahoma. Other gang members would be on the run for months and years. It wouldn’t be until August 25, 1896, that he was finally tracked down by famed U.S. Deputy Marshal Heck Thomas near Lawson, Oklahoma. In the ultimate gunfight that occurred, Doolin was shot and killed. 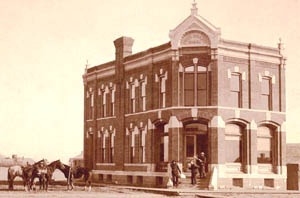 Reenactment of the Doolin robbery at the Ford County Bank in Spearville, Kansas, 1890s. The bank building no longer stands today.

Though some of the money stolen was recovered and returned to the Ford County Bank, the robbery had caused a serious shortage in the bank’s cash operations. Two years later, the bank liquidated its assets and was forced to close its doors.

By the turn of the century, Spearville had become the center of the farming and ranch area and in 1910, it had two banks, the Spearville News, flour mills, grain elevators, hotels, churches, schools, express and telegraph offices, and an international money order post office with two rural routes. The population at that time was 576.

Over the next century, Spearville continued to be an agricultural community and maintained a steady population that peaked at 813 in 2000.

In 2006, the town benefitted when one of the largest wind farms in Kansas was established. Today its population is about 785. 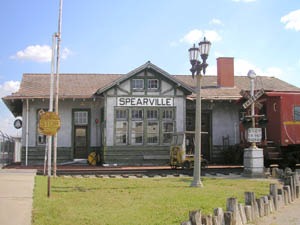 Spearville is located about 16 miles east of Dodge City on Highway 56.