Once the largest town in Rice County, Sterling, Kansas, is located in the southern portion of the county on the Arkansas River, eight miles south of Lyons, the county seat. The settlement was first established in 1871 and called Peace. One of the earliest settlers was A.G. Landis, who built a store in the settlement, which consisted of only about seven families. When the Atchison, Topeka & Santa Fe Railroad built their tracks through the townsite in 1872, the town began to grow. 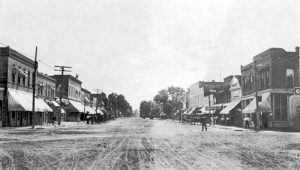 In 1876 the city was incorporated, and its name was changed to Sterling in honor of Sterling Rosan, one of the early settlers. A large business was established in May 1876 called Landis & Hollinger, which carried all manner of goods, including groceries, boots & shoes, dry goods, hardware, lumber, grain, furniture, farm implements, drugs, buffalo hides, and buffalo meat. The business was located on the northwest corner of Broadway and Monroe.

In 1878 the Davenport Elevator was built by Dow, Hancock & Gilman, and soon two flouring mills — the Crystal Mills and Keystone Mills were established.

One of the largest early industries was the Sterling Syrup Works, erected in 1881. Operated by Clements & Eustis, the factory could produce 2,000 gallons of syrup in a 24-hour period. The company raised its own cane on a tract of 640 acres and, during peak periods, employed about 60 men. 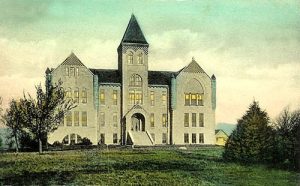 In 1886 the Sterling Land and Investment Company was organized and platted the “College Addition” to Sterling. Ten acres of land was donated by an early settler named Pliny F. Axtell, and the first building was erected in October 1886. The site was then offered to the United Presbyterian Church Council of Kansas, with the condition that they endow, operate, and maintain the school. The offer was accepted, and a charter was prepared in the name “Cooper Memorial,” in honor of Reverend Joseph Cooper, a revered former leader of the Presbyterian denomination which founded the College. The original curriculum offered four majors and a preparatory department offering high school courses for those students unable to attend such institutions in their home communities. The major included a “Classical Course,” a general liberal arts emphasis, a “Normal Course” for prospective teachers, an “English Course” for future school administrators, and a business course.

Cooper Memorial College was opened on November 1, 1887. Over the next few years, additional buildings were built and departments added. By the early 1900s, the school had an enrollment of about 180 students. 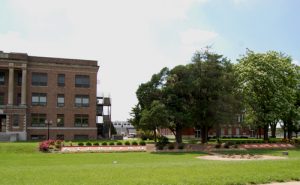 By that time, the town had grown to include more manufacturing facilities, including two broom factories, salt works, machine shops, a washing machine factory, a flour mill, marble works, a feed mill, and a seed cleaner factory. The city also boasted an opera house, three banks, two weekly newspapers (the Bulletin and the Journal,) and numerous churches and lodges.  By 1910, the population was 2,133.

Cooper College was renamed Sterling College in 1920 but continued to retain its original focus as a Christian college.

Over the next decades, Sterling continued to grow while still maintaining its small-town atmosphere. As of the 2020 census, the population of the city was 2,248. Sterling College is its biggest employer.