Sylvia, Kansas, located in the east-central portion of Reno County, got its start in 1874. The settlement was first called Zenith and a post office opened in May 1876. 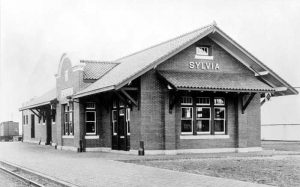 However, when the Atchison, Topeka & Santa Fe Railroad planned to come through the area, the State of Kansas deeded much of the area lands to the railroad in 1884. At that time, railroad companies encouraged development of cities along their lines by offering railroad land at reasonable prices.

In 1885, the Sylvia school district was organized, prior to the official formation of the town. The first schoolhouse was built in 1886. It was a two-story frame building with a reputation for swaying with the Kansas wind. This building was later replaced by a one-story frame structure.

In 1886, much of the land was sold to H.S. Thompson and his wife Mary and immediately transferred to the Sylvia Town Company. Mr. Thompson had come to Kansas from Kentucky in 1882. In April of 1886, the town company platted the town of Sylvia.

The new town was named Sylvia by A.A. Robinson, a vice-president of Santa Fe Railroad, in honor of his wife. Though Mr. Thompson wanted to call the new town Zenith like the original post office, but Mr. Robinson prevailed. However, Robinson agreed to put in a station five miles to the west in Stafford County and call it Zenith. Robinson is credited with building over 5,000 miles of Santa Fe tracks. Sylvia was incorporated as a city of the third class in January 1887 and the post office was renamed to Sylvia in April. T. J. Ialhott was its first mayor. 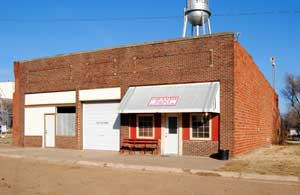 The new town grew rapidly and soon boasted a newspaper, two elevators, three lumber yards, a bank, a livery stable, and a hotel. Prosperity and growth continued through the turn of the century. Brick sidewalks were installed in 1900, a telephone system in 1903.

By 1910, Sylvia was the third largest town in Reno County and was known for its wheat and corn crops and as a shipping point for livestock and grain. That year, its population peaked at 634, at which time it had a bank, a mill, an elevator, a weekly newspaper called the Sun, telegraph and express offices, and an international money order post office with three rural routes. By that year, the old frame school had become overcrowded and a new two-story brick building with a full basement was constructed on the site of the old school. Quite modern for its time, the first brick school had a room for domestic science, a laboratory, and restrooms in the basement; intermediate grades on the first floor and upper grades including a two-year high school, on the second floor. The school was dedicated on February 11, 1910, and named Lincoln High School in honor of President Lincoln. In the next decade, students who had completed the two years of high school in Sylvia were sent on to the Reno County High School at Nickerson for their final two years. The town gained street lights in 1911. 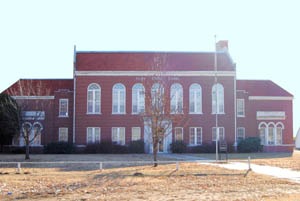 By 1925, the school was overcrowded with both grade school and high school classes in the same building. By that time, total enrollment was 231 students and plans began to build a new high school.

The Sylvia Rural High School, designed by Hutchinson architects Routledge & Hertz, was completed in November of 1926. The two-story Colonial Revival style red brick school stood as a monument to education in the small community. Its interior plan was a modern design with a separate gymnasium and auditorium and customized spaces for a science laboratory, manual arts, and domestic science classrooms.

The school was touted as semi-fireproof and “modern to the last word.” The gymnasium and auditorium were key features of the new school that were designed and open for pubic use. 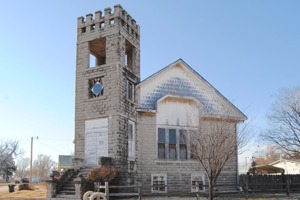 An old church in Sylvia, Kansas by Kathy Weiser-Alexander.

Just a year later after the new school opened, the Sylvia high school football team was on the losing side of a lopsided football game against another school from across the county in Haven. Played in 1927 with a final score of 256-0, the game produced multiple state high school records.

A new gymnasium was built on the east side of the school in 1949. A new shop building was constructed shortly after and manual training was moved out of the school into the new building.

By 1929 there were about 550 people living in Sylvia and the community’s businesses provided all basic goods and services. The local co-op, flour mill, and the railroad stockyards were primary supporters of the local agricultural economy. The town endured the challenges of the World Wars, Great Depression, and the Dust Bowl however, transportation advancements following World War II hastened a dwindling local economy.

By 1960, Sylvia’s population had dropped to 402 and in the next decade, the Sylvia depot, that had served as a busy freight and shipping center for more than 70 years, ceased major operations. It continued to be used for the next 20 years as office space for the Santa Fe signal crew but was finally removed in 1886. 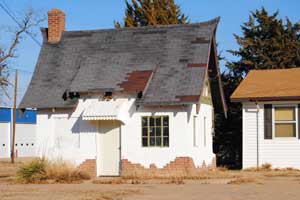 An old gas station in Sylvia, Kansas by Kathy Weiser-Alexander.

In the meantime, Unified School District 310 – Fairfield was formed in 1966 which consolidated several of the small schools in the area. Afterward, a new high school was built in Langdon and Sylvia High School graduated its last students in 1969. The building became the Sylvia Grade School serving kindergarten through 8th grade.  Later, a new middle school was also constructed at Langdon at the Sylvia school became pre-kindergarten through fifth grade and was called the Fairfield West Elementary.

However, district officials, citing the costly maintenance of the aging elementary school buildings, declining enrollment numbers, and a desire to have all students at one location, the Sylvia grade school closed in 2010.

Today, Sylvia has a population of about 200, an active grain elevator, a post office, and a church that still provides services.  The old Sylvia Highschool, listed on the National Register of Historic Places still stands along Old Highway 50. 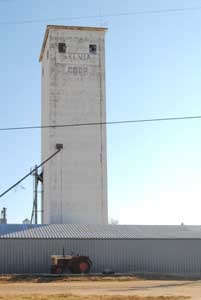 Sylvia is located in western Reno County about 30 miles southwest of Hutchinson, just south of Highway 50.