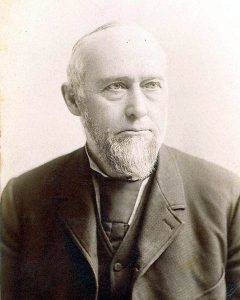 Thomas Carney was the second governor of the State of Kansas.

He was born in Delaware County, Ohio on August 20, 1824. His father, James Carney, died in 1828, leaving a widow and four small sons. Thomas remained with his mother until he was 19 years old, and frequently hauled the products of their little farm with an ox team to Newark, some 36 miles distant. When he was 19 he left home with about $3.50 in his pocket and went to an uncle, Elijah Carney, at Berkshire, Ohio, where he stayed for several months, working for his board and attending school.

In the fall of 1844, he found employment with a retail dry-goods concern at Columbus before later taking a position with a wholesale dry-goods house in Cincinnati. He was later admitted as a partner to the business and the firm of Carney, Swift & Co. became one of the best known dry-goods houses in the country. After some 12 years in Cincinnati his health began to deteriorate and in 1857 he visited the West in search of a new location.

In the spring of 1858, he opened the first wholesale house in Leavenworth, Kansas with a partner named Thomas C. Stevens. Carney soon took an active interest in public affairs and in 1861 was elected to the second State Legislature. That same year, he married Rebecca Ann Cannady at Kenton, Ohio on November 13, 1861. 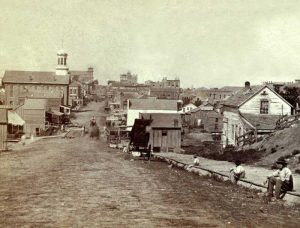 His record in the legislature soon earned him the nomination for governor in the fall of 1862. Winning the vote, he took office in January 1863. Due to his untiring efforts, several educational and charitable institutions were established during his tenure. At the close of his term as governor, he resumed his business operation. In 1886, his partner, Stevens retired, and Carney took on different partners for several years until he became the sole proprietor.

In 1865-66 he was mayor of the city of Leavenworth and later was one of the founders of the First National Bank, and became a director of the Kansas City, Lawrence & Fort Gibson Railroad. In addition to these businesses, he also became interested in mining ventures in Colorado. He retired from business in 1875.

Carney died on July 28, 1888, from apoplexy. At the time of his election to the office of governor, he was a wealthy man, but in later years financial reverses came — due, it is said, to the unworthy schemes of designing politicians — and he died comparatively poor.