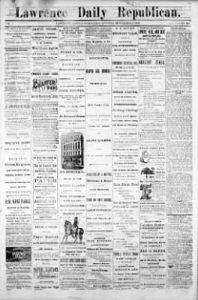 Timothy Dwight Thacher was a scholar, statesman, and editor in Kansas.

Thacher was born in Hornsville, New York on October 31, 1831. He graduated from Union College at Schenectady, New York in 1856 and campaigned that year on the platform for the new Republican Party. In April 1857 he moved to Lawrence, Kansas, and began the publication of the Lawrence Republican, a Free-State newspaper that figured prominently in state politics. He was married in that year to Catherine Faulkner Angell, who died in 1858. He was a member of the Leavenworth Constitutional Convention held in the winter of 1857 and 1858.

In 1861 he was married to Elizabeth Heilman in Philadelphia, Pennsylvania. In 1863 he purchased the Journal of Commerce in Kansas City and moved there. In 1865 he went to Philadelphia where he worked on the Evening Telegram for the next three years. In 1868 he returned to Lawrence and revived the Lawrence Republican, which had been destroyed by Quantrill’s Raid. The next year he combined it with the Kansas State Journal of Ottawa and the Ottawa Home Journal under the name of the Republican Daily Journal.

In 1874 he was elected to the House of Representatives, and seven years later, a joint session of the legislature elected him State Printer. In this office he served three terms, remaining in Topeka after his retirement from public life. He died on January 17, 1894.

Territorial Kansas and the Struggle for Statehood