Toronto, Kansas, is a small town in southwest Woodson County, situated on the Verdigris River.

Long before the area was settled by white men, this region was utilized by Osage Indians as hunting and camping grounds. 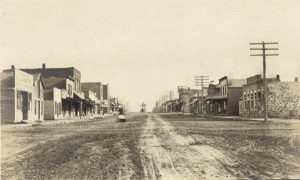 The first building erected in the area was the district school. Several years later, the town was laid out in 1869 by the Toronto Town Company, of which Enoch Reeves was President and Matthew Miller Secretary. Soon after the organization of the town company, the old schoolhouse which stood on the west line of the townsite was moved to the public square and enlarged. The first new structure built on the townsite was a small frame house by William P. Dennis that was used as both a residence and a store. That year, Dr. A. H. Mann, a physician, surgeon, and Civil War officer, came to Toronto. However, his initial stay was only about 11 months, as he was still on a waiting order list for the military. He was ordered to Fort Stevenson, Dakota Territory, in September 1871.

The second building erected on the townsite was also a store belonging to Seth R. Kellogg. When the town gained a post office on June 2, 1870, Kellogg became the first postmaster. At that time, the post office was on the Humboldt stage mail route. Later, Kellogg would be elected as a Representative to the Kansas State Legislature. 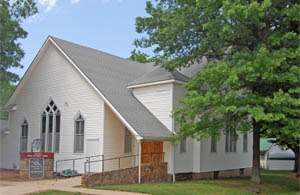 A hotel was built in 1870 by S.P. Miller that was operated by various parties until 1882. In 1873 Alexander Davis built a combination saw and grist mill. In 1877, it was sold to W. S. Lockard and completely refitted.

In 1878, Dr. A. H. Mann returned to Toronto after having served for several more years as a physician in the Army. During that time, he had accompanied George Custer’s command on the Yellowstone and Black Hills expedition in 1873. After being ordered to the Grand River Agency in Dakota Territory, he was severely wounded by Indians in May 1874. When ordered out on Custer’s fatal expedition to the Little Bighorn in 1875, he telegraphed his resignation and went to Chicago, Illinois, where he practiced his profession for about three years. After returning to Kansas, he spent the rest of his life in Toronto.

Without a railroad, Toronto grew slowly. In 1880, it was called home to just 88 people. In November 1881, nearly 12 years after its founding, it had but two stores and eight or ten dwellings. However, that changed when the St. Louis, Fort Scott & Wichita Railway extended its line from Eureka, Kansas to Toronto in 1882. 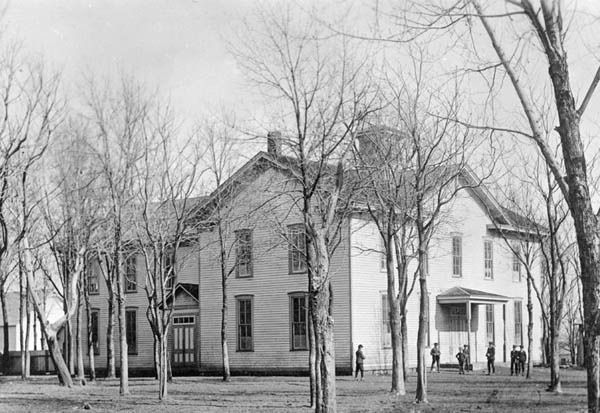 In 1881-82, a large and finely designed hotel building began to be built by parties interested in the St. Louis, Fort Scott & Wichita Railway.

In 1882, a new two-story schoolhouse was built at the cost of $3,000. With four rooms, it could seat over 200 students. At this time, the town boasted six general stores, a grocery store, a drug store, a hardware store, two hotels, two physicians, a meat market, a furniture store, two harness shops, two millinery shops, a restaurant, and two lumberyards. The Toronto Mills were also operating with the sawmill having a capacity of 4,000 feet per day; and the grist mill, with 60 barrels of flour per 24 hours. Power was furnished by a 25 horse-power engine. With the exception of the mills at Neosho Falls, this was the only other mill in the county. By 1890, Toronto was called home to 552 people.

By 1910, Toronto was called home to 627 people, at which time it was served by the Atchison, Topeka & Santa Fe Railroad and the Missouri Pacific Railroads. By that time, it was incorporated and featured all lines of mercantile interests, good schools, churches, banking facilities, and a weekly newspaper called the Republican. In 1914 the Toronto High School opened. 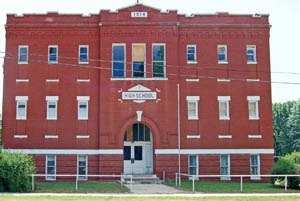 In 1918, oil was found along the Verdigris River, which brought jobs and people to the area. In 1920, Toronto’s population peaked at 829. By the late 1920s, the oil was depleted from the area, and the workers moved on. Afterward, its population fell each decade.

Toronto saw its greatest drop in population since its founding in the 1950 census when the number fell18.6%. It was then home to 600 people. The 1950s were a quiet time for Toronto until 1954 when the Army Corps of Engineers began to dam the Verdigris River to make Toronto Lake. By 1960, Toronto Lake was officially open for flood control. In 1964, Cross Timbers State Park was established around Toronto Lake, which continues to bring in visitors today. The 1,075-acre state park is located just south of Toronto. The park is adjacent to the 4,600-acre Toronto Wildlife Area and has numerous access points to the 2,800-acre Toronto Lake.

The high school closed in the 1970s when the town was consolidated with other districts.

Today, Toronto’s population is about 260. 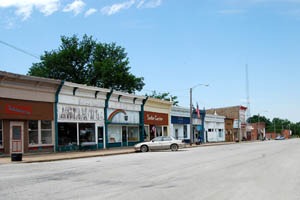