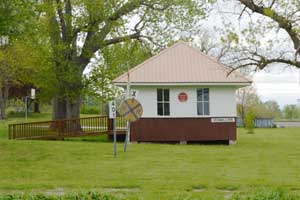 Vermillion, Kansas, situated in the southeastern part of Marshall County, got its start in 1869 with the coming of the Central Branch Railroad. It is located 28 miles southeast of Marysville on the Black Vermillion River, from which it takes its name.

A townsite was laid out in the fall of 1869 by G. R. Kelley, Theodore Collier, and the railroad company, which contained 240 acres. One hundred acres were given over to the railroad, which built a depot and sidetrack. The first building was erected in the spring of 1870 by W. H. Dickinson as a store. The post office was established in May of the same year with Theodore Collier as postmaster.

Soon after, another large building was erected by Robert Shields, which was also used for a store. In 1872 this building was used as a hotel. In 1872 a new frame building, 24×42 feet, was erected for use as a school at the cost of $2,000. The first teacher in the new building was L. B. Holmes. In the summer of 1874, G. W. Duffy built an elevator with a capacity of 3000 bushels. 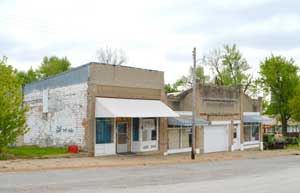 Several churches were organized during the town’s early years, including the Presbyterian in 1871, which had a church building by 1879. The Methodist Episcopal Church was organized, and the first meetings were held in the depot until a church building was built in 1874.

In 1895 three acetylene lights were placed on posts in different parts of the business section of town. A year later, two gasoline lamps were added, followed by lanterns placed near dangerous crossings and bridges. The same year, Ed Horth built another elevator. The telephone system was organized by P. H. Hybskmann and H. D. Williams, with the first connection made in 1901.

In 1903-04, a new modern brick building was erected as a high school, with 58 pupils initially. The city erected a public hall for its use, a room which was set apart and donated to the Mutual Improvement Club for a library room. 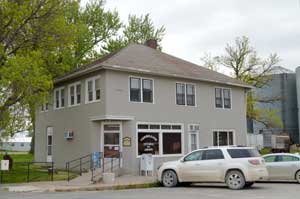 In 1910, Vermillion had become a trading point for a large section of farming country, had banking facilities, grain elevators, a newspaper, schools, churches, express and telegraph offices, and an international money order post office with four rural mail routes. That year, the population peaked at 366 people.

In the spring of 1914, Forrest Warren, editor of the VermiIlion Times, began agitating on the subject of electric lights for the town. As a result of the untiring efforts of Warren, Mayor Hybskmann, and the city council, bonds to the amount of seven thousand dollars were voted to build a transmission line from Frankfort to Vermillion. The completion of this line was celebrated in August 1914 by a three-day carnival that several prominent people attended. At the time, it was the largest crowd ever gathered in this part of the county.

Over the years, Vermillion’s population declined, and today it is home to just about 108 people. Its original depot still stands on East 2nd Street. It is the oldest existing depot in the county and possibly in the state. The structure next door, built in 1885 as a hotel for the depot, now houses the city hall and library, with a museum on the second floor. It is located at 02 Main Street. 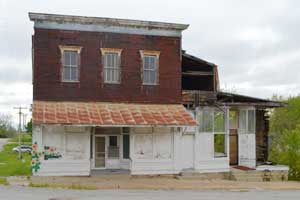 An old building in Vermillion, Kansas by Kathy Alexander.

Vermillion can be reached directly from U.S. 36 on Highway 187, the shortest Kansas state highway.