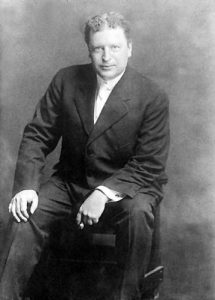 Victor Murdock was a journalist and member of the Kansas Congress.

Murdoc was a native Kansan, having been born in Burlingame on March 18, 1871. The next year his parents,  Marshall M. and Victoria Mayberry Murdock moved to Wichita, then a frontier town, where Victor attended the public schools and the Lewis Academy. At the age of 10, he commenced learning the printer’s trade, working during his vacations, and when he was just 15 years old he became a reporter. He rapidly developed the “journalistic instinct,” and five years later went to Chicago, Illinois where for some time he held a position on the staff of one of the metropolitan dailies.

In 1890 he was united in marriage with M. P. Allen, and in 1894 he became managing editor of the Wichita Eagle. In 1902 he was nominated by the Republican district convention for Congress, was elected the following November, and was re-elected at each succeeding biennial election to 1914. Afterward, he continued as editor of the Wichita Eagle until his death in Wichita, Kansas on July 8, 1945.