Located 15 miles southwest of Marysville on a gentle slope reaching back from the Little Blue River, the Waterville, Kansas, was established in 1868.

The first settler who located near the present townsite of Waterville was Stearnes Ostrander, early in the spring of 1857. He was followed during the same year by some half-dozen settlers, who located on Coon Creek, a short distance from where Waterville would be established. The first mill erected in Waterville and vicinity was built in 1858 by William Pearsoll. The mill was built on the “combination plan” and used as a saw and grist mill. In 1859, more settlers took up claims in the area. 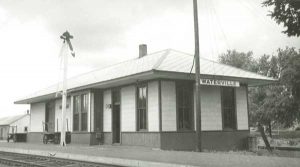 When the Central Branch of the Missouri Pacific Railroad was on its way through, it decided to extend west precisely 100 miles from Atchison, Kansas. The land was purchased from William Osborn. The railroad reached Waterville in November 1867.

The townsite was surveyed by O. B. Gunn, then Chief Engineer of the railroad, in February 1868. It was named by William Osborne, a railroad superintendent, for his hometown of Waterville, New York. Henry Agle bought the first Waterville lot and erected the first house in town. For a brief time, Waterville, the furthest point west on the railroad, became a cowtown. Stock yeards were built to receive the cattle driven up the Eastern Branch of the Chisholm Trail. However, Waterville’s cowtown days were short-lived.  Homesteaders, fences, and a government quarantine on tick-infested longhorns ended the cattle drives by the 1870s.

A post office was established on February 18, 1868, and just a few months later, Messrs. Hutt, Niggley, Peters, McCubbin, Fratour, Newell, and others built business houses. W. P. McCubbin occupied a building as a store moved from Marysville in the spring of 1868. The first hotel in Waterville was the Eagle House, erected in the spring of 1868 by Henry Agle. During the same year, the “Bay State House” was erected by August Fromm, who leased it to W. W. Smith. It soon changed hands and was renamed the Lick House. 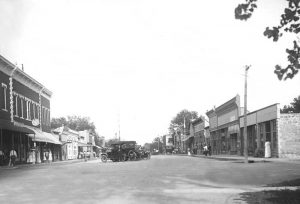 The Waterville Telegraph newspaper was established by Frank A. Root, published on January 1, 1870. In the summer of 1870, the city grain elevator was built by Mrs. Johnson & Haskell. On July 30, 1870, Waterville was incorporated. In 1870, Waterville doubled in size, business, and population.

In 1872, a new schoolhouse was built, measuring 40×50 feet. It was two stories with abasement; four rooms. The finest building in that part of the county was built of limestone at the cost of $12,000. 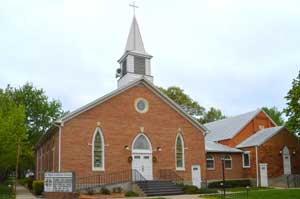 The Riverside Mills, located on the Little Blue River, one-half mile from the business portion of the town, was erected in 1873-74 by R. M. Howard. The building was constructed of stone and was four stories.

The town boasted a couple of church organizations, including the Methodist Episcopal organized as early as 1868 with services held in the railroad depot. In the summer of 1871, a church was built measuring 36×70 feet. The Baptist church was organized in 1873, and a brick church was built in 1877.

The Bank of Waterville was established on December 1, 1880, by S. T. Powell. A Cigar Factory was established in August 1882 by G. C. Martin, who made as a favorite brand the “Little Blue.” 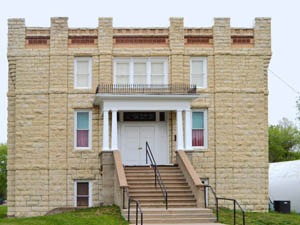 The old Opera House in Waterville, Kansas by Kathy Weiser-Alexander.

The Opera House was built in 1903 at the cost of $8,000. It is now used as a theater for community and school productions.

In 1905, the Weaver Hotel was built across the street from the Central Line of Union Pacific Railroad tracks. Passengers waited for their train in the front parlor of the hotel, found lodging upstairs, ate in the dining room, and stepped across the street for performances in the Opera House. Railroad crews also stayed at the Weaver while the workers built the railroad further west, and later, it housed the regular train crews. Drummers (traveling salesmen) arrived on the train and stayed at the Weaver Hotel in the early years. The impressive Weaver Building and “cosmopolitan” establishment was known as the “Pride of the Central Line.” Today it operates as a beautiful bed and breakfast inn.

In 1910, Waterville had telegraph and express offices, weekly newspapers, grain elevators, banking facilities, a public library, an opera house, a hotel, and good schools and churches. Three rural delivery mail routes went out from the post office. It had a population of 704. 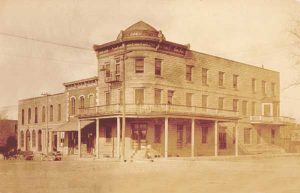 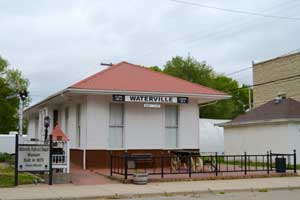 Waterville peaked in population in 1940 at 717 people. Today it has a population of about 651. Today, you will find the Victorian homes, the railroad station, and many other historic buildings along tree-lined streets.

The Train Depot, built in 1870, has been restored and houses a museum of Waterville collections. The Game Fork one-room schoolhouse has been restored and is now a meeting place for Scouting activities. It is located in the northeast corner of Turner Park. The Weaver Hotel, built in 1905, is listed on the National Registry of Historic Places, has been completely restored and today serves as a bed & breakfast inn. Waterville has many fine Victorian Homes; The Powell home on Commercial Street is also on the National Registry. “Banker’s Row,” the 200 block of East Hazelwood, is especially worth seeing. 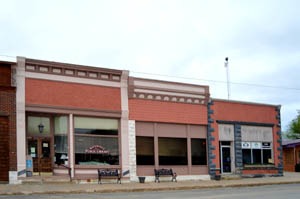 Waterville is located in southwest Marshall County on the Little Blue River. Highways US 77 and K-9 intersect here.