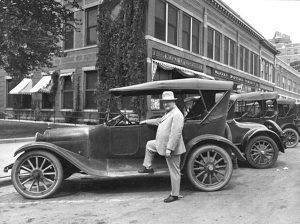 William Allen White in front of the Emporia Gazette.

William Allen White was a journalist, author, and one of the best-known men in Kansas during his lifetime.

White was born in Emporia, Kansas on February 10, 1868, to Dr. Allen and Mary Hatton)White. In 1869 Dr. White moved to Eldorado, Kansas, where William was raised. After graduating from high school he went to work on the Butler County Democrat and in 1886 he began his real newspaper career as a reporter and city circulator for the Eldorado Republican. Next, he learned to set type, run a job press and write items for a country newspaper. In the fall, he went to Lawrence to attend the state university but returned to work on the paper at the close of the school year. During 1887 and 1888 he again attended the university and in the summer of 1888, worked on the Lawrence Journal as a reporter.

In 1890, he left college without completing his courses and again went back to work on the Eldorado Republican. From Eldorado, he went to Kansas City as correspondent and editorial writer on the Kansas City Journal and subsequently, on its rival, the Kansas City Star. In 1895, he borrowed money and bought the Emporia Gazette in order to have a paper that he could run to suit himself. The paper was on the downgrade when he purchased it, but within three years he had paid for it and expended $1,000 on improvements. White ran the Gazette as a Republican journal in an independent fashion and became unrivaled in the city for newspaper publishing.

In 1893 he married Sallie Lindsay of Kansas City, Kansas the couple had one child. During the campaign of 1896 he wrote an article called What’s the Matter with Kansas, which the national press quickly picked up The Chairman of the Republican National Committee, Mark Hanna made the statement that this editorial “was more widely circulated by the Republican National Committee than any other document sent out by it.” White was regarded as an asset by both the Republicans and Democrats. He was described as having a mixture of simplicity and shrewdness, but no one could guess what he would do or say next, while behind his eccentricities there was a real, honest, warm-hearted man.

One of his first books was a collection of stories entitled The Real Issue, which was a decided success. His articles on public men, published in McClure’s Magazine, created a stir in political circles. In 1899, a study of boy life appeared by him under the title Court of Boyville, and later he published In Our Town and A Certain Rich Man which brought him much acclaim. In 1923 he won a Pulitzer Prize for his editorial To an Anxious Friend, published on July 27, 1922, after being arrested in a dispute over free speech following objections to the way the State of Kansas handled the men who participated in the Great Railroad Strike of 1922. 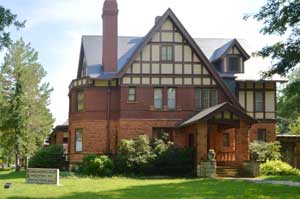 Objecting to the rise of the Ku Klux Klan in the state, he made an unsuccessful run for Kansas Governor in 1924. White continued to write countless editorials, articles, and books that earned him the title of the “Sage of Emporia.” He died on January 29, 1944. His autobiography, which was published posthumously, won a 1946 Pulitzer Prize. The Emporia Gazette is still run by his descendants today.