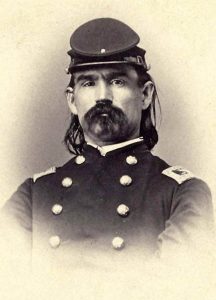 William F. Cloud was a soldier and Indian fighter in Kansas.

Cloud was born near Columbus, Ohio on  March 23, 1825. His military history began when he enlisted at Columbus in 1846, in a company that became a part of the Second Ohio Infantry in the Mexican-American War. He was soon promoted to first sergeant and took part in several battles. At the close of the war, he was elected captain of the Columbus Videttes, of the Ohio Volunteer Militia, but resigned in 1859, when he moved to Michigan.

After a short residence in that state he moved to Lawrence, Kansas, but later went to Emporia. At the outbreak of the Civil War, he enlisted in the Second Kansas Infantry and participated in the hardest engagements of the Southwest, especially distinguishing himself at Wilson’s Creek, Missouri. At the expiration of his first enlistment, he assisted in organizing the Second Kansas Cavalry and was commissioned colonel of the regiment, which took part in the engagements of the Army of the Frontier in Missouri, Arkansas, and the Indian Territory (Oklahoma.) Later, he was transferred to the Fifteenth Kansas Cavalry and served in the campaigns against the Indians in western Kansas and Indian Territory. His most conspicuous act of bravery was in 1862 when with 500 men he attacked an enemy of 5,000 at Tallequah, Oklahoma, rescued the Indian Agent, and saved the money held for payment of the annuities of the Indian tribes.

The Legislature of Kansas changed the name of Shirley County to Cloud in his honor. Soon after the close of the war, he located in Carthage, Missouri but in about 1889 moved to Kansas City, where he resided until his death on March 4, 1905.

Colonel Cloud was also an eloquent public speaker and fluent writer, one of his best works being History of Mexico from Cortez to Diaz.