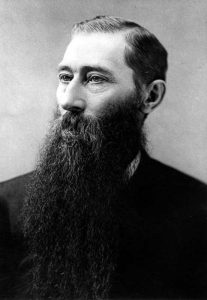 William Alfred Peffer was a soldier, publisher, and United States Senator from Kansas.

Peffer was born on a farm in Cumberland County, Pennsylvania on September 10, 1831 to Dutch parents. From his 10th to 15th year he attended public schools seven months each winter, and afterward began to teach at a small district school. He followed that profession until he caught the gold fever in 1850, and went to California, where he made considerable money before returning to Pennsylvania in 1852. There, he married Sarah Jane Barber and soon after they moved to Indiana.

He engaged in farming near Crawfordsville until he met with financial difficulties and determined to go farther west. He soon was established on a farm in Morgan County, Missouri. In February 1862, he went to Illinois to get away from guerrilla warfare, and the following August, he enlisted as a private in the 83rd Illinois Infantry. He was promoted to second lieutenant in March 1863. During the three years of his service, he was engaged principally in the performance of detached duty as quartermaster, adjutant, and judge-advocate of a military commission, and as depot quartermaster in the engineering department at Nashville, Tennessee. He was mustered out on June 26, 1865. Having studied law as opportunity afforded, he settled at Clarksville, Tennessee at the close of the war and began to practice law. 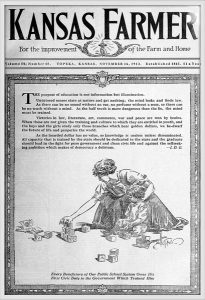 In 1870 he came to Kansas and took up a claim in Wilson County. Two years later he moved to Fredonia and established the Fredonia Journal, a weekly newspaper, at the same time continuing his law practice. He next went to Coffeyville and established the Coffeyville Journal. In 1874 he was elected to the State Senate as a Republican and served one term. He was a delegate to the Republican National Convention in 1880, and that year he moved to Topeka, where he assumed control of the Kansas Farmer, which he purchased later. In 1890 he joined the Farmers’ Alliance Movement and the following year the People’s Party elected him to the United States Senate, where he served one term. He was, in 1898, an unsuccessful candidate for Governor of Kansas, and afterward engaged in literary pursuits. He died in Grenola, Kansas in October 1912 and was interred in the Topeka Cemetery.