Willis, Kansas, is a ghost town in Mission Township of Brown County. Though it showed much promise in its early days, it is a shell of its former self today.

In the early 1880s, it was a new station on the Missouri Pacific Railroad, and the post office moved from Mission Centre on June 14, 1882. The railroad was completed to Willis on August 15, 1882. It was soon a thriving young town with several enterprising citizens who did a good deal of business. It had two handsome churches, several stores, and several fine residences. 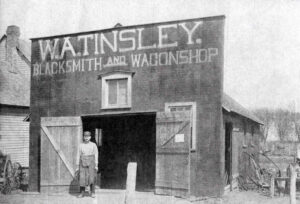 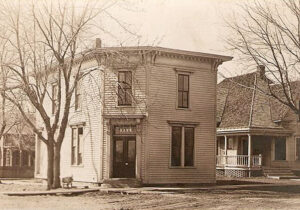 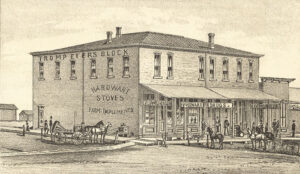 The P. Trompeter building on the corner of Hudson and 3rd Street in Willis, 1887. This building and most of the buildings between Hudson St. and Center St.were later destroyed in a large fire.

The Methodist Church church building completed at Mission Centre in the fall of 1882 was moved to Willis in March 1883. It was then entirely renovated and remodeled and had a seating capacity of 300. The dimensions of the building, including a stately corner tower, were 28×50 feet. It also had a Sabbath school with a good-sized library and a membership of 80 scholars and ten teachers.

The First Presbyterian Church was erected in the summer of 1883. It was a frame structure measuring 30 x 50 feet, with a stately corner tower and a seating capacity of 200. It was built for $3,000. Soon, there was a prosperous Sabbath school connected with the church.

By 1910, Willis was an incorporated city of the third class. At that time, it was still a station on the Missouri Pacific Railroad. It had a bank, several general stores, telegraph and express offices, and an international money order post office with one rural route. The population in 1910 was 188. 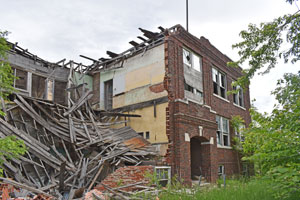 In the next years, the town did not grow, its population declined, and its post office closed on January 31, 1960. Willis high school graduated its last class in 1965.

Today, Willis still displays a couple of old business buildings, homes, a grain elevator, and several silos. The former high school is in a state of decay and has crumbled in on itself. The area is still called home to about 35 people.

Willis is located east of U.S. Highway 73/159 between Horton and Hiawatha. 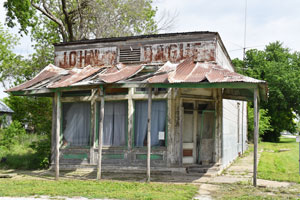