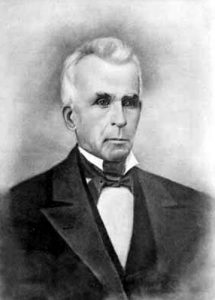 Wilson Shannon was the second Territorial Governor of Kansas.

Shannon was born in what is now Belmont County, Ohio on February 24, 1802. His father died in the winter of 1803, and it was chiefly due to the assistance of his older brothers that he received an education. As soon as he was old enough to be of assistance he was put to work on the farm, but at the age of 18, his brothers sent him to the Ohio University at Athens, where he studied for two years. He then entered Transylvania University at Lexington, Kentucky. While a student in this institution he studied law and in 1826 began to practice at St. Clairsville, Ohio. He soon won distinction at the bar and became an active factor in politics.

By 1832 he had become so well known that the Democratic Party nominated him for Congress, the Whig candidate being General James M. Bell. Although the Whigs were in a majority in the district Shannon made such a vigorous campaign that Bell was elected by a bare 37 votes. The following year Shannon was elected County Attorney of Belmont County and in 1835 was re-elected. In 1838 he was elected Governor of Ohio, but in 1840 he was defeated for re-election by Thomas Corwin. Two years later he again ran against Corwin, and this time was elected. Upon the expiration of his second term as governor, he was appointed Minister to Mexico by President John Tyler and served in that capacity until diplomatic relations were suspended in May 1845.

He then practiced law in Cincinnati, Ohio until 1849, when he went to California. Two years later he returned to Ohio, with about the same amount of money as he had when he started for the Pacific Coast and resumed his law practice. In 1852 he was elected to represent his district in the lower house of Congress, and while a member of that body voted for the Kansas-Nebraska Bill. On August 10, 1855, he was commissioned Governor of Kansas Territory by President Franklin Pierce.

The fact that he had voted for the Kansas-Nebraska Act caused his appointment to be hailed with delight by the pro-slavery men in Kansas and the western part of Missouri, who hoped to gain greater advantages than they had been able to do during the administration of Governor Andrew Reeder. Shannon’s administration in Kansas actually only lasted about eleven months, during which occurred some of the most turbulent scenes of the Kansas-Missouri Border War. After his resignation in August 1856, he moved to Lawrence, Kansas, and in a short time became one of the best-known attorneys in the territory, and later in the state.

Governor Shannon was twice married. His first wife, who lived but a few years after their marriage, was a Miss Ellis, whose father was at one-time county clerk of Belmont County, Ohio. His second wife was Sarah Osbun of Cadiz, Ohio.