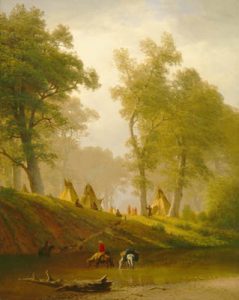 The Wolf River, a tributary of the Missouri River in northeastern Kansas, rises in Brown County, approximately three miles north of Powhattan. It then flows generally eastwardly into Doniphan County, past the communities of Robinson, Leona, and Severance. Near Severance, the river turns northward before flowing into the Missouri River approximately eight miles southeast of White Cloud.

In 1859, Albert Bierstadt, a German-American painter, wrote in a letter of his awe and satisfaction upon arriving at Wolf River. He remained in the area for two weeks and produced several sketches that evolved into the painting shown here that depicts two travelers on horseback crossing the river to trade at an Indian encampment. It is doubtful that this is an actual scene, but rather one invented to provide his eastern patrons with a romanticized view of the exotic American West.

Wolf River Ford in Doniphan County was a crossing on the Oregon Trail.

Throughout the years, the waterway has also been known as Wolf Creek, Petite Riviere de Cansez, Riviere du Loup, and Shun-ta-nesh-nanga. 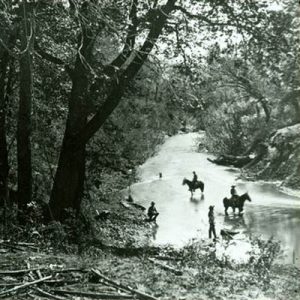