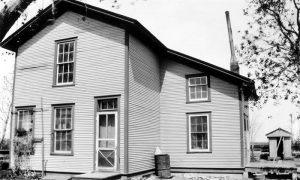 Before the town was officially founded, the site began as a stagecoach stop. A post office was established in March 1886 and named for  Robert M. Wright who owned a large stockyard in the area. That same year, a hotel was built. The settlement itself was chartered in 1887 by  William Hunt, J. D. Hendricks, Ira M. Cobb, John Murphy, and A. McLeod.

Situated along the Atchison, Topeka & Santa Fe Railroad seven miles northeast of Dodge City, it did not become the cattle market its founders were hoping for, but grew gradually to the point that it had a newspaper, a grain and shipping company, a general store and several other businesses. In September 1893, its post office shut down but reopened in October 1895.

In 1910, it had a population of about 60 people and a general store. Over the next century, Wright remained a small agricultural community and was never incorporated.

Today, Wright, Kansas continues to support a post office, several grain elevators, a few agricultural businesses, and a church. It is called home to about 160 people.