On this block of Alexander’s Main Street, the only operating business is the post office (2nd from left), by Kathy Alexander.

Also called Alexander City, this very small community of just about 70 people is the oldest settlement in Rush County, Kansas. It was first established with a trading post in about 1869 by a man thought to have been named Mr. Fink. The post, situated on the north bank of Walnut Creek, served as a refuge for Cavalry, freighters, traders, and other travelers making their way along the trail. The trading post, made of logs and topped by a lookout, was surrounded by a stockade to protect it from outlaws and Indian attacks. When buffalo hunter Billy Dixon visited the trading post in 1871, he said it was run by a man named Johnny Quinn, who was later thought to have been shot by an unknown assailant.

One of the first settlers in the area was a man named J. C. Young, who had brought his family from  Pennsylvania in 1872. That same year, the trading post was taken over by Alexander Harvey, a soldier in General Custer’s 6th Cavalry during his 1868 campaign, and was called “Harvey’s Ranch.”  As more people settled in the area around the Walnut Creek Crossing, a post office was established on February 13, 1874, with Alexander Harvey becoming its first postmaster. The town soon took his name, and the first mail service was carried by train to the “end of line depot,” where it was transferred to stagecoach and carried along the Fort Hays-Fort Dodge Trail to Alexander. Before long, a schoolhouse was built of logs that also held public and church services.

However, Alexander Harvey didn’t stay for long. He soon sold his store to pursue other interests, including working as a school teacher and farming. In December 1877, he married Mattie King of Decatur County, Illinois. Two years later, he was elected as the Rush County Treasurer, and in 1880 he moved to Rush Center, where he engaged in ranching.

What appears to be an old bank building is still utilized as some business photo by Kathy Alexander.

When the railroad was built south of Walnut Creek in 1886, the small community was moved to the south side of the creek, where it continues to sit today. The small settlement began to thrive with the Atchison, Topeka & Santa Fe Railroad barreling through town. By the turn of the century, it sported a bank, two creameries, several retail stores, an express and telegraph office, and several churches. In 1910, it boasted a population of about 150 people and continued to grow as a large red brick school was built in 1916. Later, the school received the addition of an auditorium in 1830. Alexander continued to grow until after World War II. 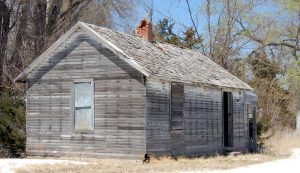 Afterward, however, the small town declined, and today is filled with the decaying buildings of once-thriving businesses and numerous old homes in various states of repair. Most impressively, its large school sits abandoned. Though still a commanding site, its windows are broken, its interior littered with trash, and its only sounds — not those of lectures and laughter, but just the wind whistling through the corridors and water dripping on its floors.

Though Alexander is mostly quiet today, it still maintains a small population and a post office.

Though no trace of the old trading post exists today, a historical marker commemorates the historic site on the west edge of town. Alexander is located about 13 miles west of Rush Center on Kansas Highway 96.