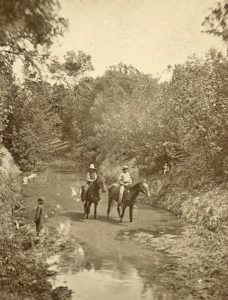 The first claim to be filed in the area was made by P.C. Dixon, who settled on the banks of Walnut Creek in 1870 near what would become Walnut City (later Rush Center) in 1870. The family of J. S. Templeton soon followed him in August 1871. He and his wife soon had a son named Samuel Alpha, who was the first child born in Rush County.

With the promise of bountiful crops on the rich bottomlands of Walnut Valley, more and more settlers came to the area, and the settlement that formed was called Walnut City. A post office was established on February 13, 1874.

At that time, the area between Walnut City and Alexander was bustling with young settlers under the protection of the cavalry units of Fort Larned, Fort Hays, Fort Dodge, and Fort Scott. The first church in the county was the Rush Center Methodist, organized in June 1874. The first store in the county was a grocery, established in Center Township the same year by John Hubbard.

Rush County was officially organized on December 5, 1874, and named in honor of Captain Alexander Rush, of the 2nd Kansas Colored Infantry, who was killed at Jenkins’ Ferry, Arkansas, during the Civil War. Walnut City was designated as the temporary county seat, and the city’s name was changed to Rush Centre (the spelling would be changed in 1895.) The first newspaper was published a few weeks later, called the Walnut Valley Standard by W. P. Tomlinson, on December 24. It would continue to be published until it moved to La Crosse in the spring of 1877. 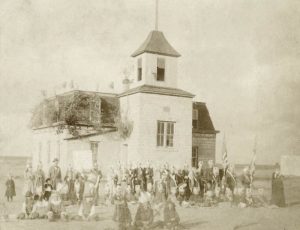 Several homes and businesses were established within no time, and the first school district was organized in 1875. That same year, the impressive two-story Pennsylvania House, a hotel and restaurant, was built. The hotel initially contained 36 rooms, a large windmill for freshwater, two fireplaces, and a broad “covered entry porch.”

Though the area was beginning to grow, just two years after the county was formed, it was re-surveyed, and the southern tier of townships were transferred to neighboring Pawnee County in 1876. This changed the county center from Rush Center to La Crosse, and an election was held to determine a permanent county seat in 1877. La Crosse won the county seat contest by 150 to 125, and the county building was moved on rollers from Walnut City to La Crosse.

However, the residents of Walnut City did not accept the results of the election, creating a county seat “war” that would rage in the courts for the next decade. Until a courthouse building began to be built in La Crosse in 1888, the battle raged in the courts, and the county seat was moved back and forth between Walnut City and LaCrosse five times following the latest election, writ, or court decision. This caused much bitterness among the county residents, aggravated by the many newspaper editorials and accusations of fraud and corruption. 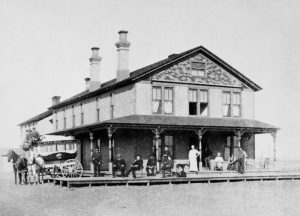 By 1878, Rush Center boasted a population of more than 1,500 people, and the City Bus Line carried passengers around town in elegant coaches.

When the Atchison, Topeka & Santa Fe Railroad arrived in 1886, more prosperity was brought to the town. The Pennsylvania House expanded its hotel, adding ten rooms.

However, when the tug-of-war between La Crosse and Rush Center finally ended in 1888, the town dramatically declined. At the turn of the century, it boasted a bank; a weekly newspaper called the Breeze, a mill and grain elevator, and several retail establishments. But its population in 1910 had fallen to only about 250 people. However, the first county fair was held that year south of Rush Center. 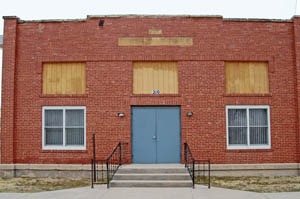 Over the years, the population continued to fall, and today, Rush Center supports only about 140 people. The old “county seat war” is celebrated every year in a two-mile-long St. Patrick’s Day Parade, where the “courthouse” is carried by wagon back to Rush Center every March 17. 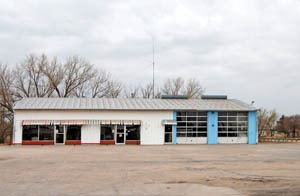