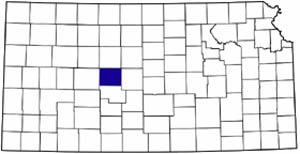 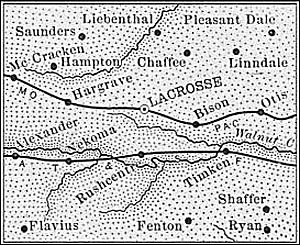 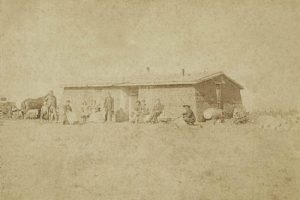 Located in the central part of Kansas, the first settlers in what would become Rush County originally lived along Walnut Creek near a trading post and stockade on the Fort Hays- Fort Dodge Trail, in the present-day town of Alexander. The gently rolling prairie was filled with wildlife, including deer, pheasant, prairie chickens, coyotes, and buffalo, from which many of the men made their livings.

The area was officially surveyed in 1867, and the first claim was filed by P.C. Dixon, who settled on the banks of the Walnut Creek near Walnut City (later Rush Center ) in 1870. Other early settlers were William Basham, Adolph Ashoft, and the family of J.S. Templeton, who came in September 1871. His son was the first white child born in the county. More followed, including A. A. Stilson, F. E. Garner, Alexander Harvey, James Corrall, and Joseph Shaw Brown.

The first post office in what would become Rush County was opened in Economy on October 3, 1871, but would be short-lived, as it closed just a few months later, on January 18, 1872. In 1873, Reverend A. Hartman, a Methodist minister, held the first church services. 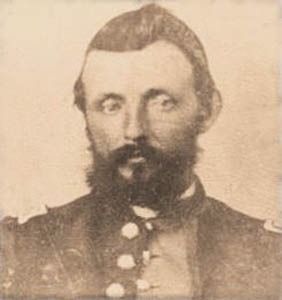 By 1874, the area between Walnut City and Alexander was bustling with young settlers under the protection of the cavalry units of Fort Larned, Fort Hays, Fort Dodge, and Fort Scott. The county was officially organized on December 5, 1874, and named for Captain Alexander Rush of the 2nd Kansas Colored Infantry, who was killed at Jenkins’ Ferry, Arkansas. Walnut City was designated as the temporary county seat, and the city’s name was changed to Rush Center.

A few weeks later, the first newspaper was published, called the Walnut Valley Standard at Rush Center, by W. P. Tomlinson on December 24. It would continue to be published until it moved to La Crosse in the spring of 1877. The first store in the county was a grocery, established in Center township in 1874 by John Hubbard.

Though the area was beginning to grow, just two years after the county was formed, it was re-surveyed, and the southern tier of townships was transferred to neighboring Pawnee County in 1876. This changed the county center from Rush Center to La Crosse, and an election was held to permanently move the records to La Crosse in 1877.

A conflict arose between the two towns when the county records were moved to La Crosse, and the following year, another election was held that again made Rush Center the county seat and took the records back. When the City of La Crosse took the matter to the District Court on fraud charges, Rush Center failed to respond, and a judgment was rendered in favor of La Crosse on default. In the meantime, the records were being moved by wagon back and forth between the two towns amid threats and gunfire, but thankfully, no one was killed. Rush Center, however, wasn’t done with the dispute and took the case to the Supreme Court, which rendered the decision once again in favor of Rush City in 1886. This gave rise to a new county seat election. Under the law, a petition of two-thirds of the legal voters was necessary to secure a special election in this case. With the petition secured, an election was held on August 23, 1887, resulting in favor of La Crosse.

The haggling continued over paperwork technicalities until finally, in March 1888, the courts found that La Crosse had won the war, and the records were to be returned. When Rush Center did not voluntarily provide the records, a large body of La Crosse citizens, fortified by about 50 farmers, went to Rush Center and forcibly took possession of the county property. A courthouse was erected the same year that continues to stand and is listed on the National Register of Historic Places.

In the meantime, the county continued to grow, and numerous small settlements dotted the landscape. On July 1, 1887, the Walnut City Daily News reported:

The county was crossed by two railroads, which entered the east line from Barton County — the Missouri Pacific Railroad running through La Crosse and the Atchison, Topeka & Santa Fe Railroad from Great Bend through Rush Center.

By 1900, the county population, living on 718 miles in the county, was 6,134. Over the years, it has fallen, as small farms have given way to larger ones, and many of the youth have moved to cities. The population of the county today is about 2,950. 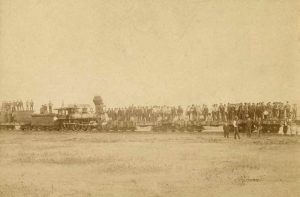 Also exiting were many small settlements that once survived in Rush County. At one time, some two dozen towns dotted the Rush County plains, some with post offices, some not. Just a couple of these have some remains, but most do not. See Rush County Extinct Towns.