Named in honor of the many buffalo that once roamed the surrounding prairie, Bison, Kansas, is located in central Rush County. 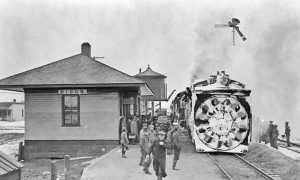 The town started when the Missouri Pacific Railroad plowed through the area in 1886. However, the region had seen settlement for several years before the coming of the railroad. The first “school” was held in a farm home in 1877, and the following year, the Lone Star German Methodist Episcopal Church and schoolhouse were built of native stone one mile west of where Bison would later be established.

The town officially began when the railroad arrived, and the name “Buffalo” was first chosen. However, when they found the name was already in use, it was called Bison, and the first homestead was built in the town in 1886.

In the spring of 1888, the Missouri-Pacific Railroad Townsite Company surveyed and platted the town, and the post office was opened on May 7th and a general store, just a few months later in July. 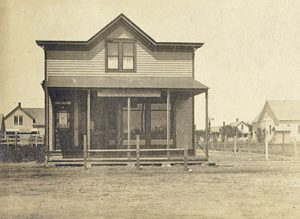 Before long, Bison was developing in a thriving community. At the turn of the century, it had a bank; a weekly newspaper called the Bison Bee, a telegraph and express office, a telephone company, and several retail stores. Other churches were also built, including the English Methodist Episcopal and German Baptist Church.

In 1890, the original Lone Star German Methodist Episcopal Church west of the city built a new church a mile north of the site. The building was then sold to the school district, and classes were held there until 1947, at which time it began to be used as a clubhouse by the Sunshine Extension Homemakers Unit of Bison.

The first gas well drilled in Rush County was at the north edge of Bison in 1903, marking the beginning of oil and gas development in Rush County. By 1910, the town’s population had grown to about 375. The following year, the town was officially incorporated. 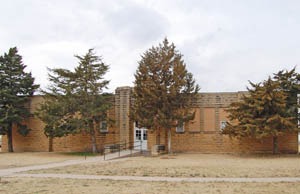 In 1937, the Works Progress Administration (WPA) built a new grade school of native stone blocks and a hand-dug municipal water well that measured 18 feet in diameter and 69 feet deep. In 1935, they built the Bison City Hall of native limestone over the well. Today, the well continues to produce an abundance of water.

Bison lives on today with about 179 people and strives hard to preserve its heritage. The Bison Community Museum, located on Main Street, displays numerous items of area history, including photographs, tools, and household goods.

The historic Lone Star German Methodist Episcopal Church and the school continues to stand, and currently, furnishings and memorabilia are being collected to restore the interior of the school to its former appearance. 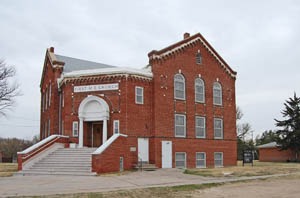