Located at the western edge of Rush County, McCracken, Kansas, was established in December 1886 along the soon-to-be-completed Missouri Pacific Railroad. 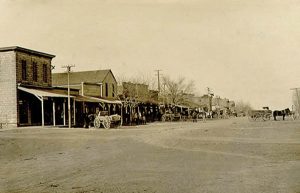 It was named for J. K. McCracken, one of the first trustees. Immediately, lots began to be sold, and within a month, the fledgling town was assigned a post office on January 31, 1887. That first year, the flourishing settlement also gained a bank, two grocery stores, a newspaper called the McCracken Enterprise, a drug store, theater, and numerous other businesses. The Evangelical United Brethren Church of McCracken was also established in 1887.

Before the town was even developed, area Catholic parishioners had constructed a St. Mary’s Church building in 1886 southwest of McCracken, which would later be replaced with a stone building in 1906.

In 1901, the post-rock City Jail was built, which now serves as a museum. The following year, the Bank of McCracken was established and constructed of native stone. This building also continues to stand, appearing to be a residence today. 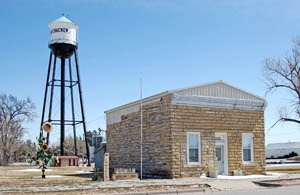 The early part of the 20th century was difficult for McCracken as fire swept through its business district, the first time in 1905 when the east side of Main Street was burned. Four years later, in January 1909, another fire destroyed most of the buildings and businesses on the west side of Main Street.

However, the town rebuilt and persevered, and by 1910, the city of some 371 people sported about 100 businesses, including a flour mill, grain elevators, several more churches, and a telegraph and express office.

Just southwest of McCracken, the Catholic congregation had grown to such an extent that another St. Mary’s Catholic Church was required to meet their needs. Stone from the existing church was used for the basement and foundation before the work commenced to build the impressive church that continues to stand today. The building was completed in 1926.

Later, the small town would profit from shale quarries that produced what was referred to as “wonder mud,” which was widely used by drilling companies throughout the United States. The population of McCracken peaked in 1930 at 594. 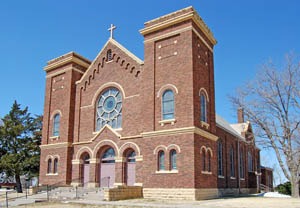 But, for McCracken, the prosperity wouldn’t last, and when the Missouri-Pacific Railroad removed the town from its depot list for passenger and freight trains, the city quickly declined.

Regrettably, in 1997, a restructuring of the area Catholic churches took place in the area, and mass was no longer held regularly at the impressive St. Mary’s Church. However, members of the parish formed the Saint Mary’s McCracken Heritage Association to preserve the beautiful building currently utilized for special occasions and services.

Today, the small town of McCracken supports about 175 people.

Its heritage, however, can still be seen at the McCracken Historical Museum located in the former City Jail on Main Street. The native stone jail was originally opened in 1901 and also housed the City Hall and Fire Department. The museum displays numerous items relating to McCracken’s history and a display of the 1973 movie “Paper Moon,” filmed in and around McCracken.

Across the street is the old McCracken Grocery, a large two-story building built in 1919. The former grocery still displays its ornate tin ceiling, original wood floors, and old-fashioned shelves along its walls. 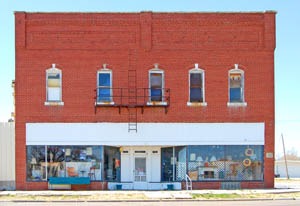