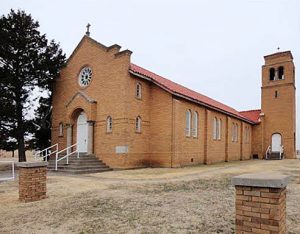 Loretto, Kansas, is an extinct town in Rush County.

Established in 1912, the settlers of Loretto were an offshoot of the Pfeifer Catholic parish in nearby Ellis County. Part of a large group of German-Russians who had immigrated to Kansas in 1876, these families had settled 4.5  miles south of Pfeifer and attended the Holy Cross Church in Pfeifer.

However, by 1902, it was evident that the church’s congregation was growing too large, and plans began to be made for building a new church at Pfeifer. Seventeen families who were actually living over the county line in Rush County contributed about $3,000 to building a new church with the stipulation that if they decided to establish their own congregation, they could have that money back.

By 1912, the Rush County parishioners decided to build a new church and were given their money back. Adam S. Urban and Stephen S. Urban each donated five acres of land for a new townsite, which they first called Illinois. Martin Urban gave one acre for a cemetery, and Joseph Urban donated land for a church, parsonage, and school. That fall, a two-story structure was built that served as both a school and church, and the following year, the citizens built a rectory. In 1913, the town name was changed to Marienfeld, and later, at the recommendation of Father Stutz, renamed Loretto. The same year, the townsite was divided into building lots and sold to raise money for the church.

In 1916, 60 families were living in Loretto. Despite its growing size, the settlement never had a post office. Lay people were the first teachers at the school, but in 1918, the Sisters of the Order of the Precious Blood took over the teaching responsibilities, and a convent was built.

Continued crop failures between 1918 and 1924 greatly reduced the population, but the community began to grow again in 1925, having about 50 families living in the village. As the settlement continued to grow, construction of a new church began in the spring of 1927 and was dedicated in May 1928, called the new “Mariahilf Kirche ” (St. Mary’s Help of Christians Church.)

On March 10, 1948, the old combination church and school building was destroyed by fire. A new church was built in 1955 and a new school in 1958. The school remained in operation, but the population of Loretto was falling and was consolidated with the Otis–Bison Unified School District in 1968.

As the population in the community continued to decline, the final mass of the church was held on June 29, 1997, and the building was re-designated as a shrine. Today, only a few people live in the area, and little remains of either Loretto or Pfeifer. Though both of the towns’ churches continue to stand, they are both closed and can only be toured by appointment. Loretto is located 7.5 miles due east of Liebenthal on Rush County Road 44. In addition to the church, a few scattered buildings and homes continue to stand.

Loretto continues to appear on some maps but is sometimes spelled “Loretta.”