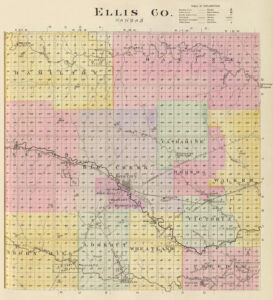 Located in north-central Kansas, Ellis County was created by a Kansas legislative act on February 26, 1867. It was named for Lieutenant George Ellis of Company I, Twelfth Kansas Infantry, who was killed at the Battle of Jenkins’ Ferry, Arkansas, during the Civil War. 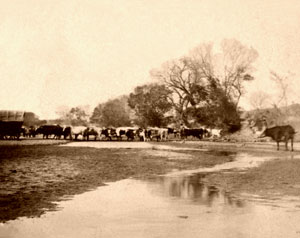 Cattle at the Smoky Hill River, Kansas by Alexander Gardner, 1867.

Like much of western Kansas, the area is a broad stretch of prairie with little natural timber growth. Across the northern portion of the county, the Saline River flows, and the southern part of the county is watered by the Smoky Hill River and its tributaries, the largest of which is Big Creek.

Before the county was formed, Fort Fletcher was established in the fall of 1865 on Big Creek, about 14 miles southeast of where Hays City would later be built. However, the post was located on low-lying land along the creek and was utterly destroyed by a flood that occurred in the spring of 1867, in which several Buffalo Soldiers lost their lives. The fort was then abandoned, and Fort Hays was established near where Rome and Hays City would later be built.

In May 1867, the Lull brothers of Salina established a general store on the west side of Big Creek, a little north of where the railroad tracks were being laid. By the middle of June, several houses had been built, and the town was first called Rome. One of the town’s co-founders was Buffalo Bill Cody, who, along with his partner, William Rose, expected the city to be the metropolis of the county, and they would make quite a profit from the sale of lots. Early in June, Bloomfield, Moses & Co. established a general supply store, and later, Joseph Perry built the two-story Perry Hotel. 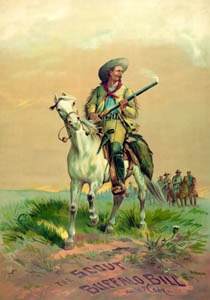 With the Kansas Pacific Railroad laying track in the area and employing some 1,200 men, the town grew quickly, and by the end of July, the fledgling settlement boasted over 2,000 citizens. Along with soldiers and buffalo hunters, these railroad men provided ample customers for the many saloons and gambling halls that quickly sprang up.

Cody and Rose, however, would make a fatal mistake when they refused to take on a man named Dr. W.C. Webb as a partner in their townsite venture. Unknown to them, Webb had the authority to establish town sites for the railroad, and before long, the “Big Creek Land Company” platted the town of Hays City, on the other side of the Big Creek, about a mile east of Rome.

A rivalry at once sprang up between the two places, but the railroad company threw its support to Hays City, and Buffalo Bill Cody and William Rose were giving free lots away to anyone willing to build or erect a tent in the townsite. Many of the citizens and businesses of Rome soon moved to nearby Hays City to be closer to the railroad. When a cholera epidemic hit Rome in the late summer of 1867, any who remained, including Cody and Rose, left. A year later, there was nothing left of the town.

In October 1867, a petition requesting the organization of the county was presented to Governor Samuel J. Crawford. Approved, commissioners were appointed, and Hays City was made the temporary county seat. At that time, the county supported about 630 people. 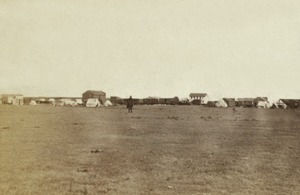 The early history of Ellis County is primarily confined to Hays City, which was characterized by many incidents of frontier life, including those where guns played a conspicuous part. The first three Sheriffs of the county met with violent deaths. The first, Thomas Ganlon, met his death at the hands of outlaws; the second, Peter Lanahan, was killed when trying to quell and disturbance; and Sheriff Alexander Ramsy was killed while attempting to arrest two horse thieves.

Another sheriff during these early days of Hays City was Wild Bill Hickok, who was employed as a “special marshal” to try to tame the lawless city. However, during his tenure, Hickok got a little carried away with his gun, killing soldiers and two citizens and wounding several others. After killing the soldiers, Hickok fled Hays City to evade the military authorities and was next heard of at Abilene. 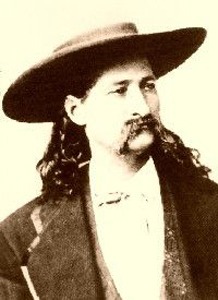 At a special election in April 1870, Hays City was made the permanent county seat. Settlement of the county was slow, but in 1872, a small colony from Ohio was located near Walker, in the eastern part of the county. These folks were soon followed by two more groups of settlers, one from Pennsylvania and one from New York. The same year an Englishman named George Grant purchased 50,000 acres of land from the railroad company, intending to colonize it with English farmers. During the next two years, some 300 Englishmen, several of them with their families, immigrated to the area.

The grasshopper scourge of 1874 caused many of the settlers to leave the county, but in the three years beginning with 1875, a large number of Russian immigrants came to take the places of those who had left.

A few miles west of Walker, a village called Victoria was established on the railroad line. Before long, its residents had built a stone depot, a stone church known as St. George’s Chapel, a grain elevator, a general store, and some 25 houses for its population that grew quickly to about 150 people.

From 1875 to 1877, many Russian immigrants came into the county. They established five separate settlements, including Schoenchen, Catherine, Munjor, Pfeifer, and Victoria, which was regarded as the “capital” of these Russian settlements. 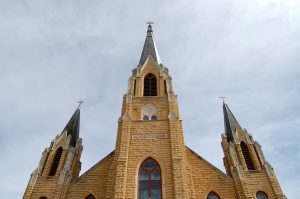 However, many of these early settlers found they had made a mistake in settling in Ellis County, as farming was not profitable. After years of effort, many of them moved away in the early 1880s. Of those who stayed, they turned to ranching, and before long, cattle and sheep became a primary mainstay of Ellis County residents.

By the early 1900s, Ellis County’s population was over 12,000, and over the next century, it continued to grow. The people of the county figured out how to more efficiently farm the land, which is now filled with golden wheat fields and livestock ranches. Fort Hays University, established in 1902, drew new residents by the thousands each year, and Hays has continued to be the county’s largest city.

In 2003, two national German organizations recognized Ellis County as the official German Capital of Kansas because of its strong German Heritage and German traditions that date back to 1876. There are several towns and villages in the county founded and/or settled by German immigrants, including Antonino, Catherine, Ellis, Munjor, Pfeifer, Schoenchen, Victoria, and Walker.

The county’s rich history can be seen at several museums and historical sites, including the Fort Hays State Historic Site, the Ellis County Historical Society Museum, the Sternberg Museum, and the Walter Chrysler Home & Museum in Hays;  the 1911 limestone St. Fidelis Church in Victoria; and the Ellis Railroad Museum in Ellis, Kansas. Many of the other German villages also display beautiful churches and stone buildings.

For outdoor enthusiasts, nearby Cedar Bluff State Park provides over 14,000 acres of water and wildlife area for hunters, campers, and fishermen. 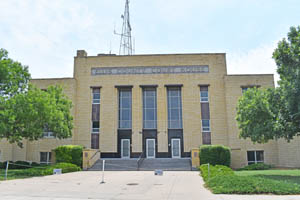