Schoenchen, Kansas located in southcentral Ellis County, is one of several area villages established by Volga German immigrants in the area. 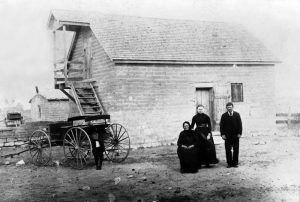 Schoenchen got its start when a conflict arose among the first settlers of Liebenthal in Rush County. When several proposed moving Liebenthal to another location with a better water supply, it split the group, and part of them moved out of the county altogether, settling in what would become Schoenchen.

The new town was originally called San Antonio, but several settlers wanted it to be named after their villages in Russia — Schoenchen or  Neu-Obermonjour. As a compromise, they named their new village Schoenchen, and the church was named for the patron saint of the church in Neu-Obermonjour — St. Anthony. 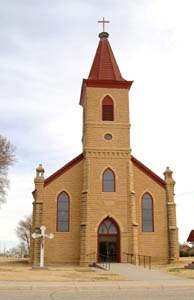 The settlers built their first small stone church in 1880, but they abandoned it when the foundation settled badly after heavy rain. It was replaced by a frame structure in 1881, and in 1900 they began building the large stone St. Anthony’s Church which continues to stand today. It was dedicated on June 13, 1901.

The tiny village finally obtained a post office in 1902. In 1904, the building of a new rectory for the priests to live began. Constructed of the same type of limestone as the church, the home including two levels and twelve rooms. It was completed in 1905 for $3,500. Today, the building serves as a private home.

In 1916, a new stone parochial school was built and placed in charge of the Sisters of St. Joseph. In June 1917, the population must have fallen as Schoenchen’s post office was closed.

In 1926, the city voted bonds to build a new high school. The new school was constructed with modern American red brick and contained 16 classrooms and a gym. During the Great Depression, teenagers from Liebenthal, Loretto, Pfeifer, Munjor and Antonino also attended the Schoenchen High School. 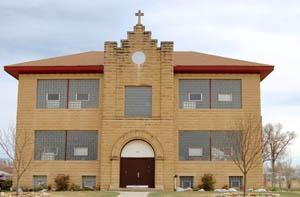 The town once again gained a post office in May 1938, which remains open today. The same year, a new gymnasium auditorium was built, and the former auditorium was remodeled into additional classrooms. The new gym, built of native limestone, was erected adjacent to the high school. It also served as a social center for various community activities.

In 1940, the parochial school was changed to a public school, but the pastor continued to give religious instruction twice a week until he was compelled by state law to curtail his activities in 1953. However, the church continued to use the building for parish dinners, church meetings, and funeral dinners. In 1995, the board voted to close the school, and students from Schoenchen then attended school in Hays.

Though Schoenchen continues to be a small town of just about 200 people today, it is still incorporated, and a few businesses remain open. 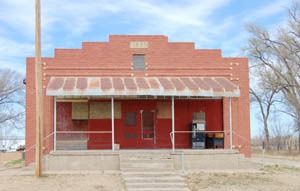