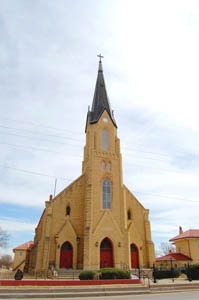 Liebenthal, Kansas in Rush County, was established in 1876 by immigrants of the Saratov/Volga region of Ukraine in Russia. Located on Big Timber Creek, it is one of the oldest settlements of several communities in Ellis and Rush Counties founded by these immigrants who were under the jurisdiction of Francis Joseph I, Austrian Emperor of the Holy Roman Empire.

In 1875 the Czar of Russia sent out a decree that the German colonists had lost their 100 years of special privileges and must fulfill the same duties and military obligations as all other Russian citizens. Many of them arranged to come to the United States, leaving  Russia on October 24, 1875, boarding a steamship in Germany, and landing at Baltimore, Maryland, three weeks later.

About 14 families numbering about 60 people then traveled to Kansas, where they founded Liebenthal on February 22, 1876. The settlement was named for Liebenthal (love valley), Russia, and the newcomers immediately began to build simple sod houses. 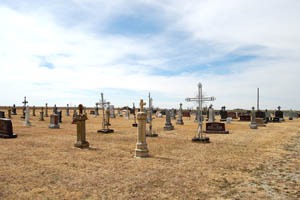 Another immigrant group arrived on August 14, 1876, which included 59 people who settled about ½ mile north of the new town. Soon another settlement was begun on the south bank of the Smoky Hill River, called Schoenchen, also named for a town in Ukraine.

The Russian immigrants donated two acres for a new Roman Catholic Church, but services were held at private residences until it could be built. The church was completed in 1878, and in the fall of 1889, a parish house was added to the property. The first parochial school was built in 1897. The settlement received a post office on November 28, 1899. 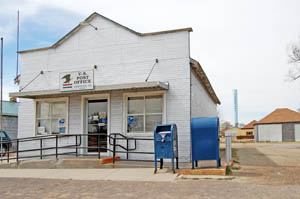 By the turn of the century, the settlement boasted more than 500 people, and plans were made to build a new church. From 1902 to 1905, residents labored to complete a large St. Joseph’s Kirche of native stone. An Austrian/German artist made the stained glass windows. The first church was then utilized as a school. Despite the town’s size, reports of the city in 1910 describe it as having only one general store.

On two occasions, a fire destroyed the wood sections of the cathedral’s roof, but the church was restored both times and continues to stand today as one of the most beautiful churches on the Kansas plains. The rectory and parochial school; are both constructed of native stone quarried near the community. 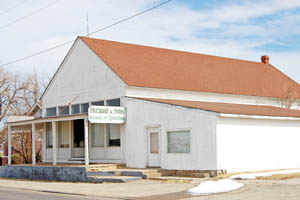 On a hill overlooking the town is the old Liebenthal cemetery is filled with a wide array of unique headstones. The population of the small town stands at just about 92 today.