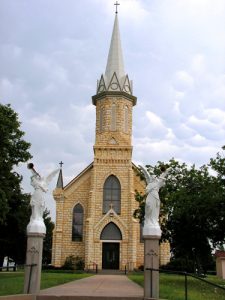 Catherine, Kansas is located northeast of Hays on the banks of Victoria Creek. The settlement was named in honor of the Great Empress of Russia, Catherine the Second.

Catherine was founded in April 1876 by German-Russians from Katharinenstadt, Russia. These people included the families of Justus Bissing, Friedrich Karlin, Peter Karlin, Jacob Karlin, and Friedrick Koerner. When the families, which numbered about 27 people, arrived in Hays, they first rented a building, in which they all lived for about five weeks. They drove their wagons to the new townsite every morning, hauling material and building homes. More families, comprising 73 people, arrived in July. Yet other German-Russians would join the others in September 1876 and August 1877. The original land was purchased from the Kansas school commission, with each resident contributing to the purchase price and receiving shares. A post office was established in the village in November 1882.

The first homes in Catherine were simple, having no luxuries, but their appearance was far better than other area villages, and they were built of high quality, mostly of stone quarried in the area.

The townspeople continued their Russian custom of living in towns and driving to and from the farm each day to work. The livestock was kept in town on a specific section set aside for grazing purposes. While this custom was socially advantageous, over time, it would cause the village to become one of the poorest settlements in the area due to all of the commuting time. Finally, the people realized this was not practical, and the practice was ceased.

In absence of a priest, Catholic services were often held outside or in homes until a schoolhouse, which also served as a church, that was built in 1879. For the next 13 years, services were held there until a new church building could be completed. In October 1892, the new church was dedicated.

In 1897, the communal shareholding of the St. Catherine Town and Grazing Company was changed, and deeds were issued for ownership of town lots and land. By 1902, the community’s children had outgrown the school, and a new four-roomed stone structure was built. It was entrusted to the Sisters of St. Agnes, who had taken charge of the old school.

Another change was in the making for the St. Catherine Town Company in 1908. In February, the last bit of communal land,  upon a petition signed by two-thirds of the shareholders, was divided among the shareholders by casting lots. By 1910, the town was called home to about 50 people.

Catherine continues to survive, the St. Catherine Catholic Church church still serves parishioners, and the small town still has an open post office. The village is located about nine miles northeast of Hays.