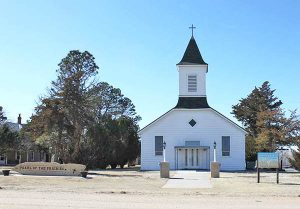 Vincent, Kansas is an extinct town in Ellis County.

This small village got its start in 1907 when several families of the St. Fidelis Church in Victoria, desired to have a church nearer to their farms. At that time, many of them lived as far as 11 miles from church at a time when trails and bridges over creeks were few.

Twenty-two families were in favor of the movement and the first services were held in a one-room schoolhouse. Construction of the St. Bonifatius Church began in May 1907 and was completed in early December of 1907. The first mass and dedication were held on December 18, with Father Vincent Brandt. The church was named after the great Apostle of Germany, St. Boniface.

In 1910, a townsite was platted and the town was called Vincent after its first priest. In 1911, the community began to organize a parish school. Without the funds to build a facility, the parishioners and church worked with the school district to relocate the one-room schoolhouse and build an additional room if the parish would provide the teachers. This was agreed to and the church built a home for the two Sisters from Concordia that would serve as teachers. Most of the labor and materials were donated and the school opened in September. The school operated much like a parochial school but the District paid the Sisters and maintained the school while the parish assumed the needs for the Sisters home.

Although the town never grew very much, a grocery store was moved there from Pfeifer.

In 1956, the Nuns were withdrawn due to the lack of teachers to staff the school. It was then taken back over by the school district, but finally closed in 1970 at which time students attended classes in Victoria.

Today, the remote church, which calls itself the “Pearl of the Prairie,” is still open. Only a few houses make up the village today. It is located about seven miles southeast of Victoria.