An old homestead near Pfeifer, Kansas by Kathy Alexander. 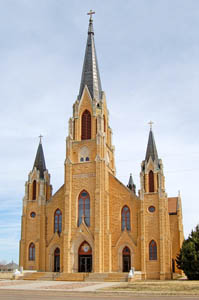 Founded in August 1876 by immigrants who were originally from Pfeifer, Russia, the village was built on the south bank of the Smoky Hill River. Among the founders of the colony were some of the very first of the Germans to leave Russia, including Joseph Stremel, Michael Meder, Mathias Urban, and Christ Stegman. They originally left their homes in Russia in October 1875 and along the way were joined by other groups of Russian immigrants. Over the next two years, more settlers came to the fledgling village and by 1878, the colony had about 41 families, numbering 171 people.

The original site chosen for the town had been railroad land and was to be paid for in 11 annual installments. It was divided into shares and each resident paid a cost proportionate to the amount of land held by each.

However, trouble soon arose when some of the landholders were not able to pay for their shares. Others, too, objected to the location of the town, so finally, in 1884, the colony moved northwest to its present site, which had been obtained by John Schlieter under the homestead plan. He divided the land into shares, for which he provided a deed to the purchaser on receipt of the payment.

The residents immediately began to build simple homes and farm the area land. They built their first church, a small frame structure, in 1879. By 1887, the village had become big enough for a post office, which opened on March 15. In 1891, the residents built a new stone church that replaced the simple frame building previously used. 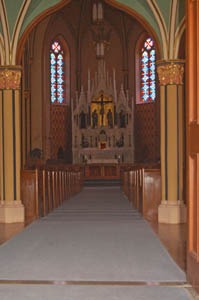 By 1910, Pfeifer had grown to about 150 people and sported a school and a couple of retail stores. Soon, plans were made for a bigger stone church and construction began on the Holy Cross Church in April 1915. At the time the church was known as “the two-cent church” because parish families paid two cents for each bushel of wheat they produced to fund construction. They also donated much of their time to build the church, including the quarrying and delivery of the stone.

The beautiful gothic-style church was completed in May 1918, at a cost of $56,000. A parochial school was also built for the education of area students.

Unfortunately for residents of the community, the decision was made by the Diocese of Salina to dissolve the parish on July 1, 1993. The church today, no longer holds regular services, but remains open to the public on a daily basis and is still used for funerals, weddings, and other special events.

The Holy Cross Church in Pfeifer was voted as one of the Eight Wonders of Kansas Architecture because it is the finest example of a Gothic-style church in the state. A tour through the beautiful building features a rib-vaulted ceiling, decorative columns, and pointed-arch windows and doorways. The central spire is 165 feet high, believed to be the tallest Gothic church spire in Kansas.

The nearby Holy Cross Cemetery has many interesting ornate Volga German iron crosses and is worth a visit. 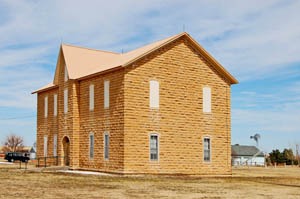 Though Pfeifer’s population is very small today, its post office remains open. The tiny town is located about 10 miles south of Victoria.