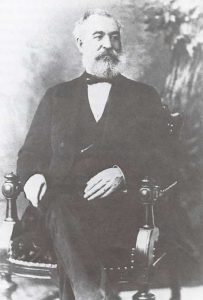 Victoria, Kansas, began when a British man named George Grant wished to establish a prosperous colony along the Kansas Pacific Railroad in 1873. Grant purchased more than 69,000 acres of land on the south side of the railroad, with hopes of adopting British agricultural methods and stocking the land with improved imported sheep and cattle. The new town was surveyed and platted in 1873 and named Victoria, after Queen Victoria. Under his leadership, the colony was initially settled by 38 Scottish and English immigrants. A post office was established in Victoria in June 1873.

The settlement showed much promise over the next couple of years when several hundred British immigrants, many of them with their families, arrived in Victoria, bringing large numbers of fine sheep and cattle. 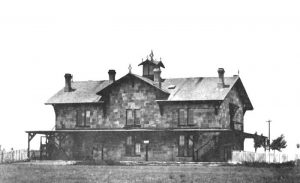 Soon, a stone depot, a grain elevator, a general merchandise store, and a stone church known as St. George’s Chapel, and about 25 homes were built in the new community.

Grant, who wanted to bring a more “genteel quality” to America, recruited numerous immigrants who were of nobility. These men were often sent money from their families, and soon the “Victoria Hunt Club,” a cricket club, and a race track were built. Free with their spending, there were dances and other social activities, but these men showed little interest in agricultural pursuits. Soon, when their parents realized their sons were not spending their money wisely, they began to reduce their allowances, and many became disenchanted and returned to Britain. Other new settlers who found that land was unsuitable for farming also began to return to their home country. 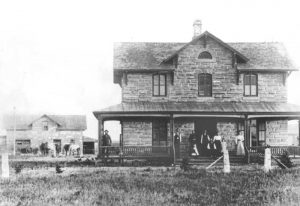 In 1876, George Grant moved into an English Manor-style house he acquired through a foreclosure. Today, the house still stands as a private residence whose ancestors were original immigrants in the area. When Grant died on April 28, 1878, he had lost most of his fortune. He was buried in front of the St. George Episcopal Chapel, and his grave can still be viewed on East 1st Street. He is best known for introducing Aberdeen Angus cattle to the United States.

Though Grant’s plans of a British community failed, the town would not die, as just three years after he had established Victoria, a large group of German-Russians settled just north of the Kansas Pacific Railroad, about ½ mile from Victoria, in 1876. When these immigrants arrived, they quickly began to make improvements. They soon named their new town Herzog, and more and more German-Russians joined them over the next two years. 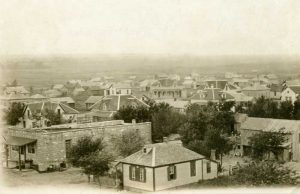 Because of the large number of people living there, Herzog became the largest and most important of the German colonies in Ellis County. The settlers met for religious services at Alois Dreiling’s home, and they soon built a frame church adjoining the house. Sir Walter C. Maxwell, a Catholic Englishman living south of Victoria, started plans to build a stone church. That church building was completed in August 1877, but it became too small with the town growing.

The St. Fidelis Church was founded by Father Anthony Mary and construction began in  November 1881. The new church building, which held up to 600 parishioners, built entirely by immigrants, was dedicated on October 19, 1884. By the turn of the century, the people once again found themselves in need of more room, and under the guidance of Father Jerome Mueller, plans were made beginning in 1905 to build a new one. 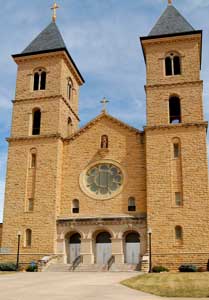 The plans were revised in 1908, and the cornerstone was laid in October 1909. Two hundred 25 families of the St. Fidelis Parish helped build this church which was completed in 1911. The exterior was constructed of native limestone, quarried seven miles south of Victoria. The stone was then loaded on wagons and hauled to the building site. The 50-100 pound stones were then laid by local masons. Called the “Cathedral of the Plains,” the church was completed in 1911.

The church measured 220′ long, 110′ wide at the transepts, and 75′ at the nave when complete. Its ceiling is 44′ above the ground, and the towers rise 141′. At the time of its dedication, the seating capacity of 1,100 made it the largest church west of the Mississippi River. Today, the church is considered one of the “Eight Wonders of Kansas” for its architectural grandeur and impressive craftsmanship.

By the turn of the century, Victoria and Herzog, which had virtually merged, boasted two banks, two mills, a grain elevator, several retail establishments, a telegraph office, a money order post office, and a population of about 500. Herzog was “officially” merged into Victoria in 1913. 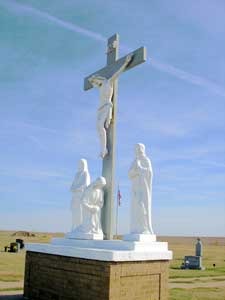 A beautiful monument in the St. Fidelis Cemetery in Victoria, Kansas by Kathy Alexander.

Today, this quaint little town supports about 1,200 people. Its rich history can still be seen in its many stone buildings, including the St. Fidelis Church, which continues to serve parishioners today.

Victoria is located about eleven miles east of Hays, just a couple of miles south of I-70.

Just off Old US-40, a memorial honors six rail surveyors who Cheyenne Indians killed in 1867. The killings led to the Battle of the Saline River. 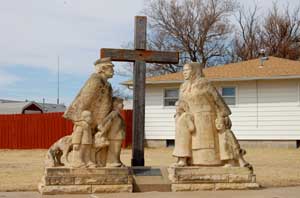 The Volga-Germans of Herzog are honored with a statue. Photo by Kathy Weiser-Alexander.